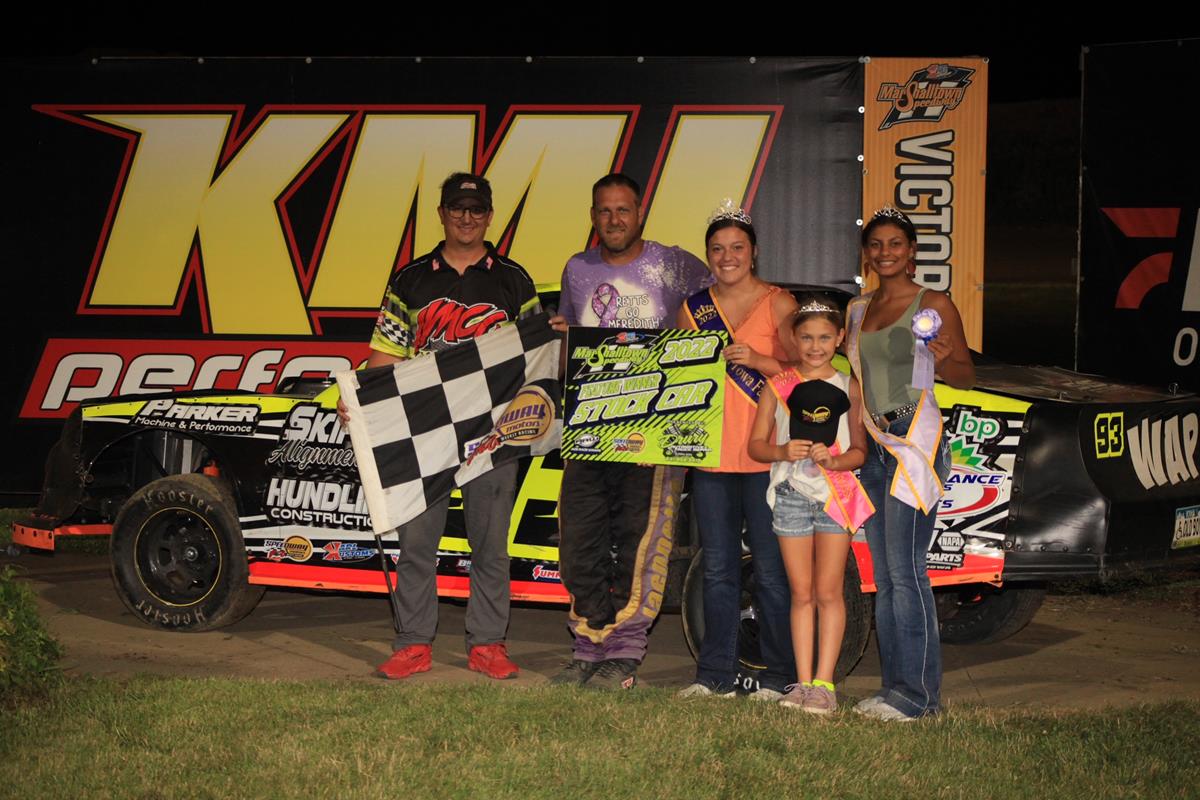 Outhouse to the Whitehouse for Jaennette

Racing returned to the Marshalltown Speedway on Friday night for the Minute Man Printing Presents the Central Iowa Fair Races.

The IMCA Northern SportMods took to the track first for their 20 lap feature. Chris Burke held down the top spot from the drop of the green through lap seventeen. That's when Travis Peterson was able to find his way around Burke and had the lead with just two laps remaining. He was then able to hold on and score the victory, his first of the season at the High Banks. Burke held on to second place, Kaylin Lopez took third, fourth went to ninth place starter Sam Wieben, and rounding out the top five was Taylor Bass.

The STARS Mod Lites ran their 15 lap main event next paying $100 just to start their feature. Dillon Raffurty, Kansas City, Missouri driver would lead this one from flag to flag untouched. Joel Huggins posted a second place finish, and Randy Bryan drove it from ninth starting spot, to take third. Justin Raffurty, Kearney, Missouri was fourth, and Josh May completed the top five.

The IMCA Hobby Stock 20 lap feature went nearly caution free, with only one yellow for debris on the track, marring their run.

Eric Knutson overtook early leader Solomon Bennett for the lead on lap seven, and then never looked back on his way to the checkers. Seventh place starter Bradley Graham was the runner up, and Seth Butler was third. Solomon Bennett and William Klosterman were fourth and fifth respectively. This was Knutson's second feature win of the season.

The IMCA Stock Cars always put on an exciting race, and Friday's 20 lapper was no different.

The first handful of laps saw Michael Smith, Steve Meyer, and Michael Jaennette running a heated battle up front. Lap six saw Jaennette end up sliding off the racing surface and into the victory lane area when a close racing incident brought contact. Jaennette rejoined the field, but many positions down.

Steve Meyer was the captain of the ship then after getting past Smith, when another racing incident brought out the caution flag. That's when Smith ended up being the next car put out of the running when cars touched during close racing.

When the race restarted, Damon Murty was now on Meyer's tail and the two then began to battle for the top spot. A few laps later, yet another racing incident occurred when the two touched, and both ended up at the top of turn four....Meyer rolled over, ending up on his side, and both drivers out of competition.

The lap twelve restart now had Dave Atcher as the captain of the ship, Austin Kaplan was running second, and Michael Jaennette had now made his way back up to run in the third position. It took but two laps until Jaennette had the lead.

The closing laps saw Jaennette pull away from the field, and take the flying checkers.....and park it the right way in Victory Lane this time. Dave Atcher took second place, Scooter Dulin came from twelfth to finish third, fourth went to Odessa, Texas visitor Leslie Gill who started thirteenth, and Sully, Iowa's Brett Maasdam was fifth. This was Jaennette's second win of the year at the track.

It was 20 laps of Modified fury next, with Zack Rawlins holding the top spot in the early going. Then suddenly, eighth place starter Dallon Murty came calling and grabbed away the lead on lap five. It was all she wrote from there on out as Murty circled the rim of the track, pulled away, and took the win. This was his second in a row, and fourth of the year. Ronn Lauritzen finished second, and Jimmy Gustin, who started eleventh, was a close third. Fourth went to Dustin Kroening, and California visitor, Randy Brown, was fifth.

The IMCA Sport Compacts were on the program for the night, and wrapped up the racing with their 15 lap feature. Kolby Sabin dominated this one, leading most of the race on his way to an easy win. He finished well ahead of second place Tyler Fiebelkorn. Blake Driscol was third, fourth was Mark Smith, and Mitchell Bunch was fifth.

Racing continues next Friday night at the High Banks of the Marshalltown Speedway when it will be Salute to Marshalltown Police/Rumours Bar and Grille/$1,000 to win IMCA Stock Cars. Pits open at 5:15, gates at 5:30, hot laps 6:55, and racing at 7:30. 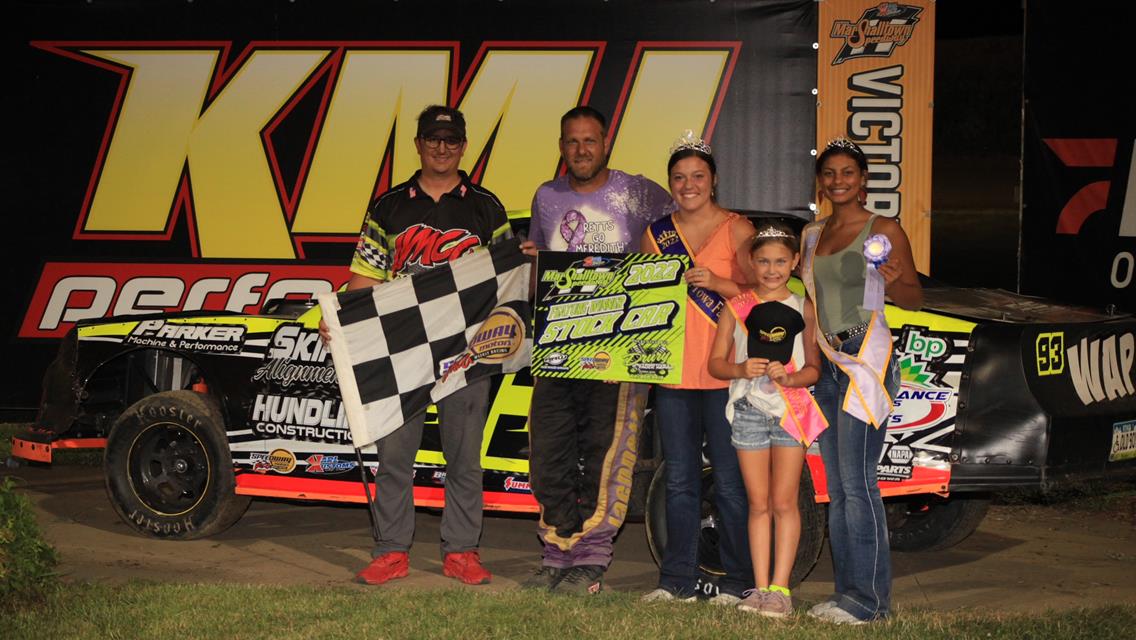 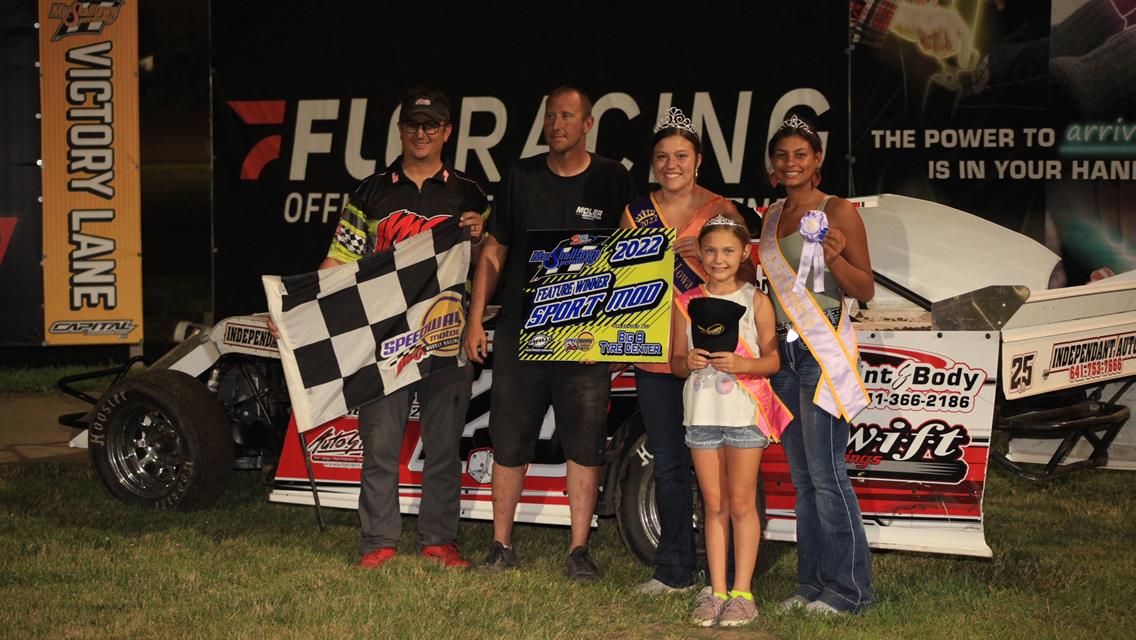 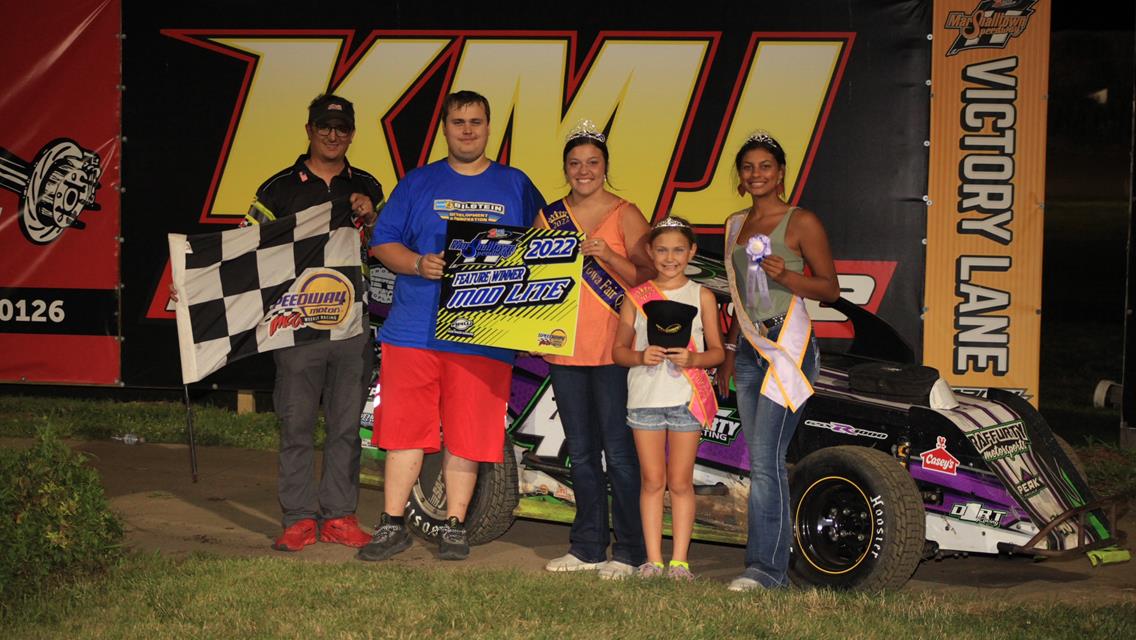 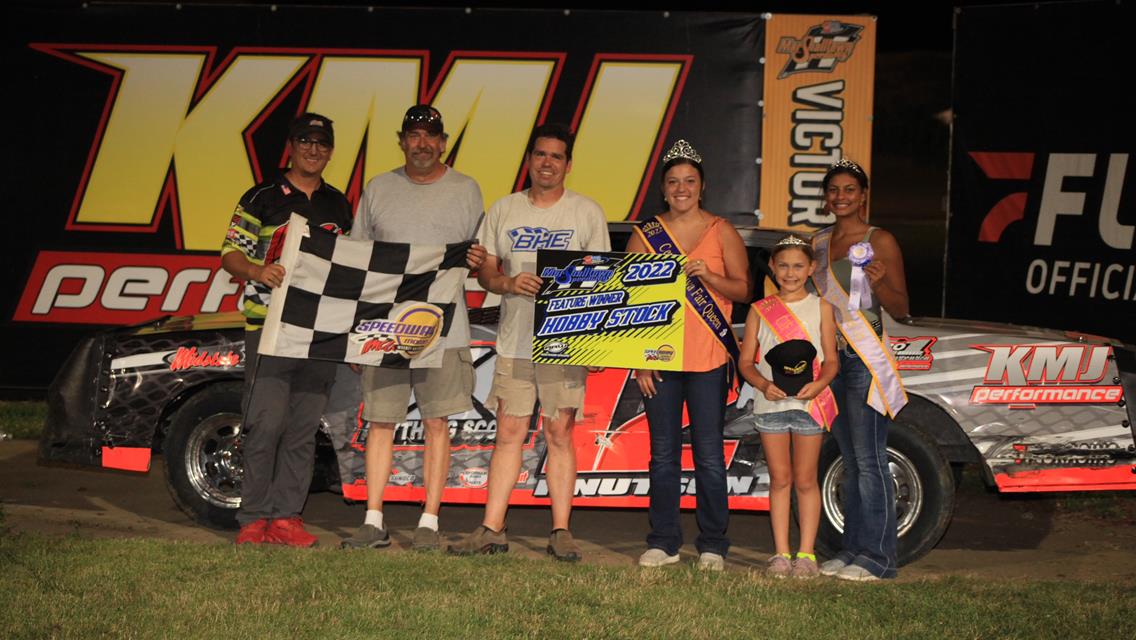 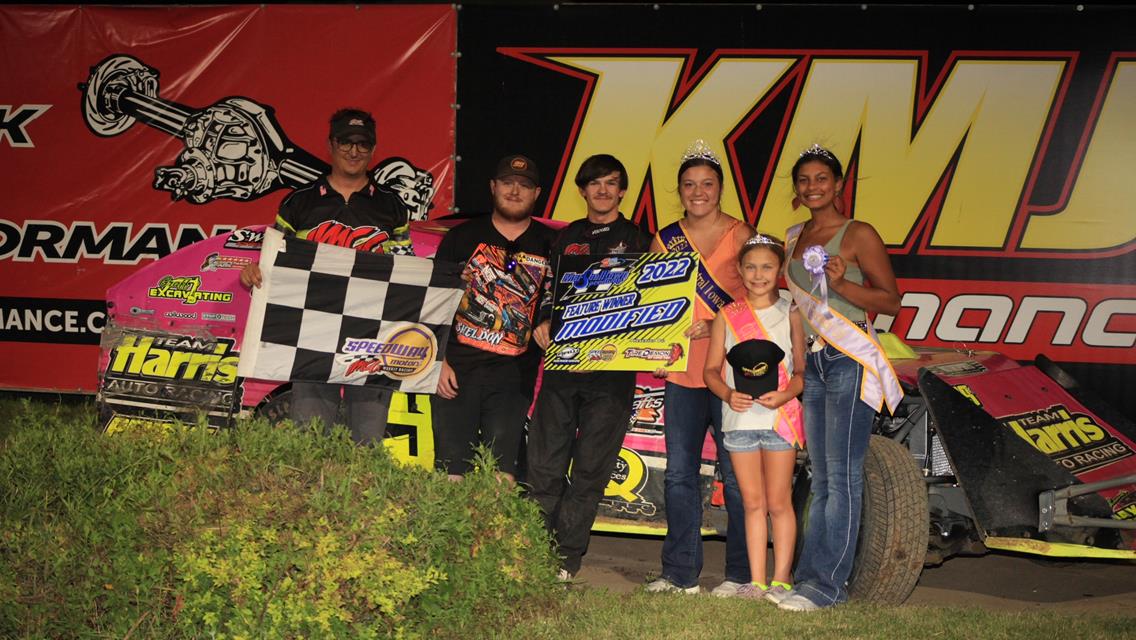