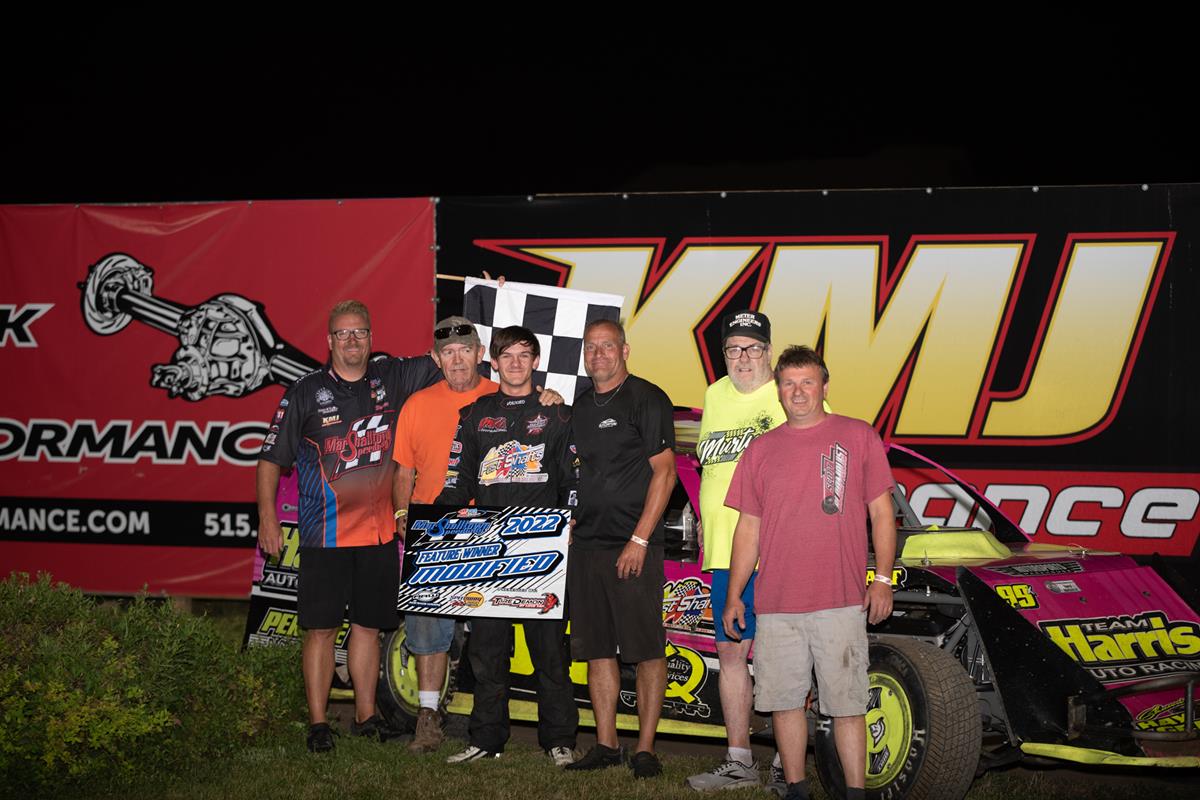 It was Triple E Insulator Night at the Marshalltown Speedway Friday night, with 115 cars in seven classes in competition.

The Mod Lite 15 lap feature came to the track first. Joel Huggins had just taken the lead away from Darrick Knutsen on lap three when the race was red flagged when Mikade Meyer took a tumble in turn four. Meyer was not injured and the race was soon restarted.

With Huggins in command as the race returned to green, he pulled away from the rest of the field and won going away. The race finished caution free after the red flag at lap three. Finishing a good distance behind in second was Austin Gray, Josh May was third, fourth went to Cory Sonner, and Randy Bryan was fifth. Huggins, who started tenth, captured his third feature win of the season.

The visiting Outlaw Mini Mod class made its third trip to the High Banks this year. They ran a 12 lap feature that saw Troy Ihrke lead all but the opening two laps as he sailed to the victory. Nathan Kilwine, who had won the two previous races at Marshalltown Speedway this season, finished as the runner up just ahead of Ben Kraus in third. Following a good distance behind in fourth place was early leader TJ Stalker, and Logan Brown was fifth.

The IMCA Sport Compacts ran 15 laps in their A main and it was Kolby Sabin leading most of the flag to flag non-stop event. He finished well ahead of second place David Kimmel. Tyler Crimmins started twelfth and finished third, fourth was John Schuring, and hometown driver, John Gill rounded out the top five. This was Sabin's fourth trip to Victory Lane at Marshalltown this year.

Eric Knutson went home with the win in the 20 lapper for the IMCA Hobby Stocks. He snatched the lead away from Rockwell, Iowa's Carter Koop with six laps remaining and held off a hard charging John Watson in second at the finish line. Carter Koop held on to finish third, and Sam West finished an impressive fourth after starting twenty-second. Cory VanderWilt, Sully, Iowa, was fifth. Knutson made this his third win of the year.

Taylor Bass, who calls Ackley, Iowa home, held down the top spot in the 20 lap feature event for the IMCA Northern SportMods through lap eleven. That's when Tony Olson saw his chance after running down the leader, and flew into the lead on lap twelve. He never relinquished that top spot the rest of the way to the checkers and the win. He had to hold off cousin Kyle Olson who finished second. Bass held the third spot, Travis Peterson was fourth, and Mason Day, Farmersville, Texas was fifth. This was Olson's second victory of the year.

The IMCA Stock Cars showed again just why they are called "The Class too Tough to Tame".

Todd Reitzler flew to the immediate lead when the green fell, taking to the top of the track to run the rim. It wasn't long until Michael Jaennette came calling and began to apply the pressure. While Reitzler stuck to the top, Jaennette was running the lower line, and the two ran this way for lap after lap.

The closing laps saw Jaennette try his best to get the upper hand, throwing sliders, but nothing would quite stick.....until two laps to go. That's when Jaennette found his way to the lead, and he would hang on to take the checkers in the exciting race. Steve Meyer started fourteenth, and finished in third, veteran hometown racer Jeff Wollam came from sixteenth starting spot to finish fourth, and Jared Daggett took fifth after starting in twelfth spot. Jaennette now has three wins at the speedway this season.

The night cap was 20 laps of IMCA Modified ground pounding fury. They followed up the Stock Car's fast and furious race with one of their own.

Johnathan Logue looked to be easily on his way to a victory as he got the lead early on. Then by the midway part of the race, Gilman's Richie Gustin had thrown his hat into the ring, getting by Chris Mills, and now Dallon Murty had moved from ninth, to fourth.

Logue was still holding off the competition when a caution flew at lap fifteen, bunching up the field for the restart. When the green waved, Murty, who had gotten to third running spot, tried a slider in turn two, not quite sticking, and again in corner four...which did the trick, sliding into first place. The closing laps were all Murty's as he pulled away in the final moments to take the comfortable win. Richie Gustin took the runner up position, Zack Rawlins had a good run and finished third, Logue slipped back to finish fourth, and Ronn Laurtizen rounded out the top five.

Next Friday, August 5, is the rescheduled Dale DeFrance Memorial. After being weathered out twice previously, the third time is the charm. The SLMR Dirt Super Late Models will be on the program, along with the IMCA Modifieds, Stock Cars, Northern SportMods, and Hobby Stocks. Hot laps are 6:55 with racing at 7:30. 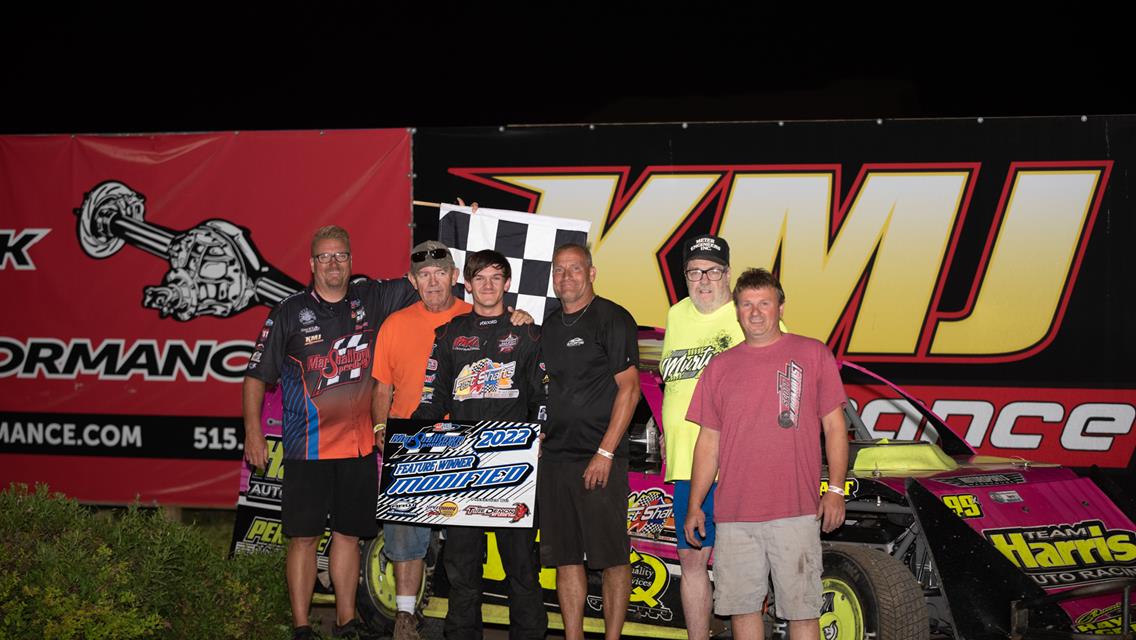 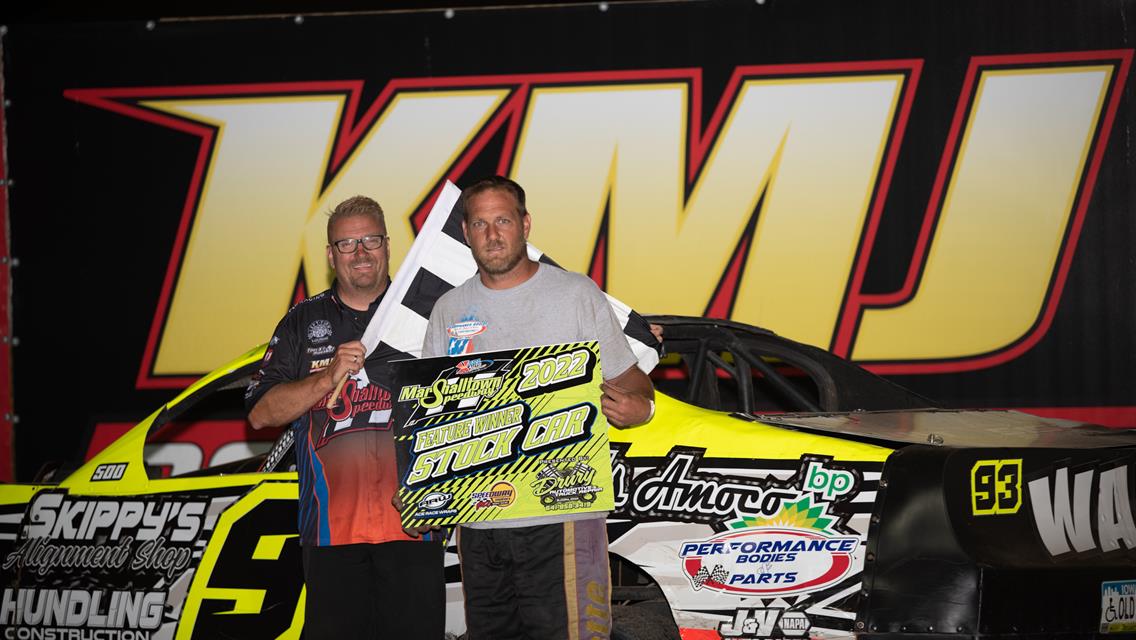 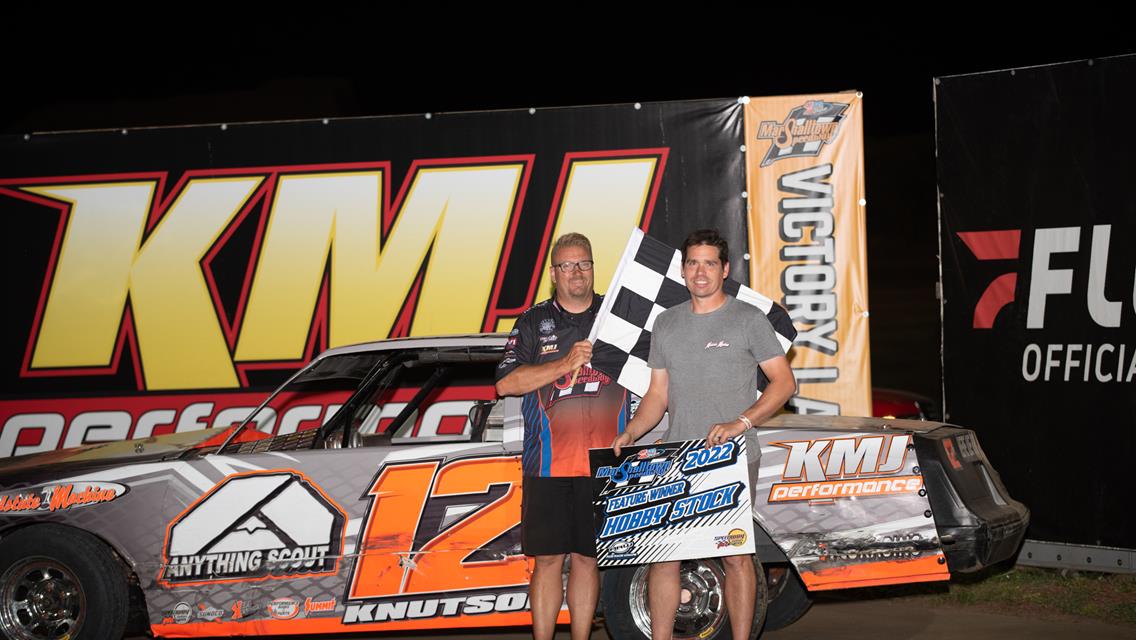 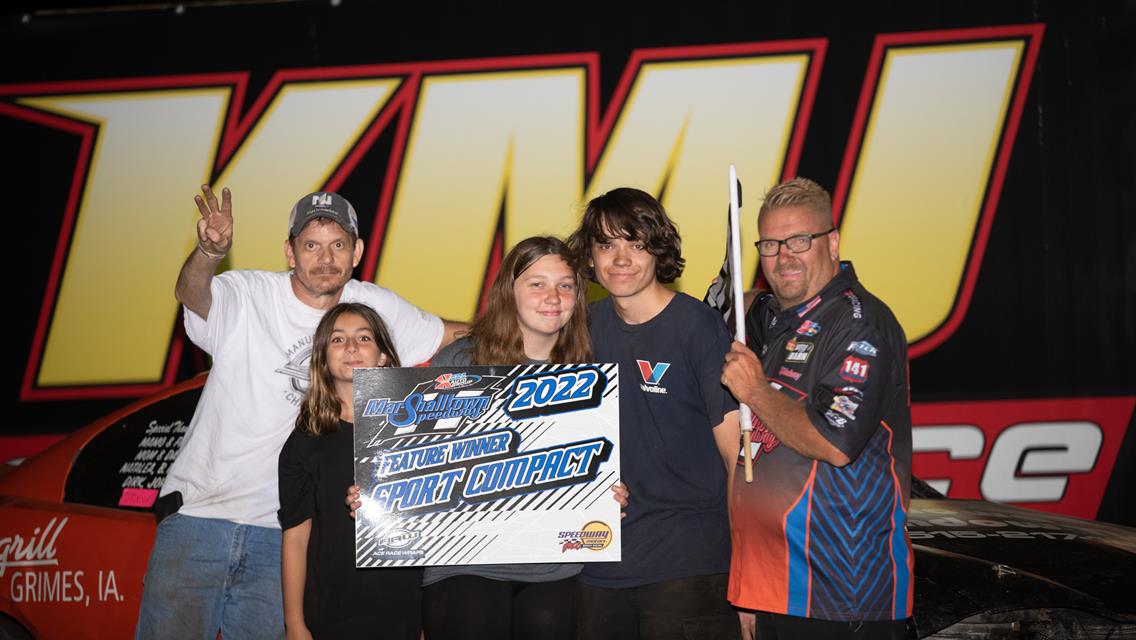 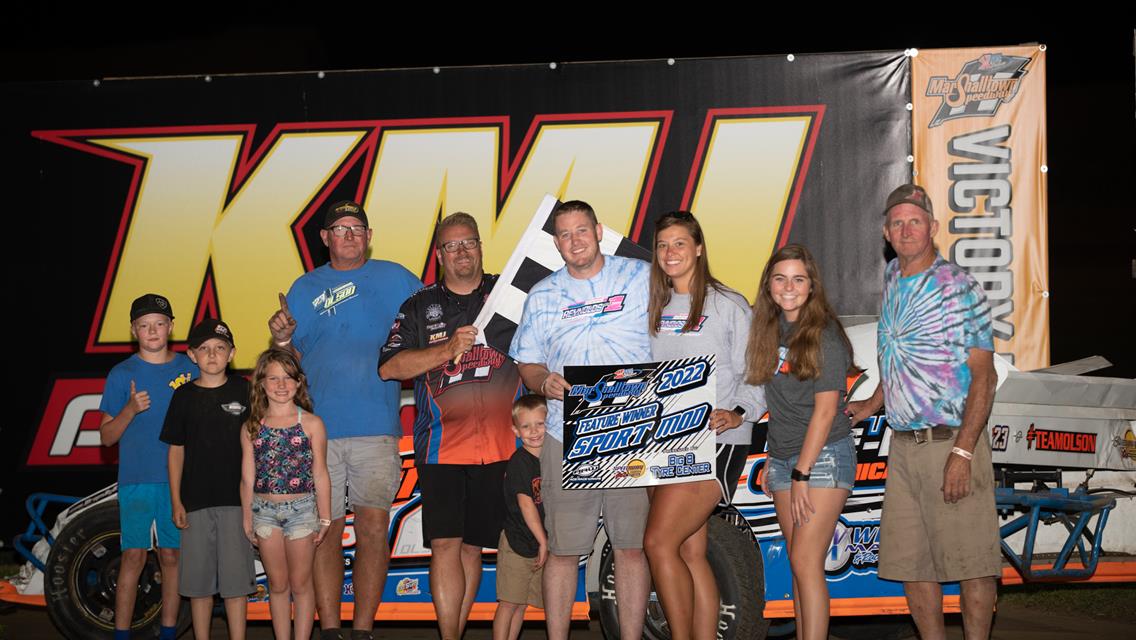 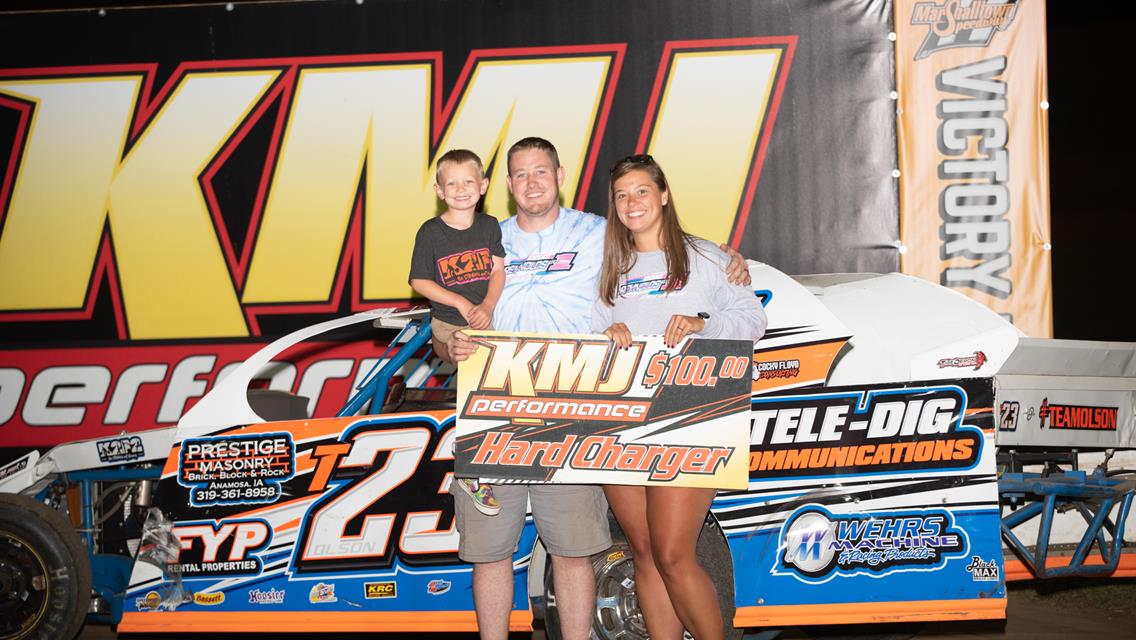