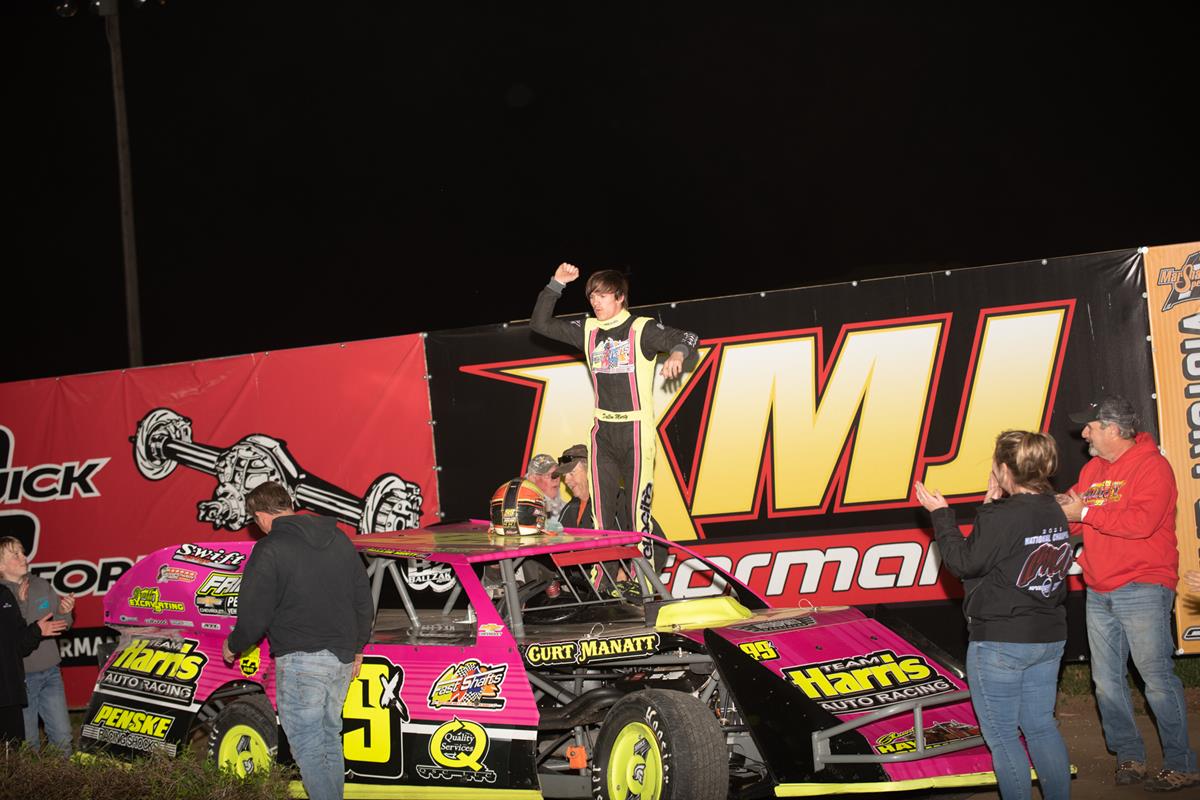 May 20, 2022
After a Wednesday night special FloRacing Super Late Model Night in America, the Marshalltown Speedway was right back into action on Friday for Night #2 of regular weekly points racing.

Dallon Murty topped the field in the IMCA Modifieds, Kaden Reynolds was the winner in the IMCA Stock Car class, and Kyle Olson made it two in a row IMCA in the Northern SportMod division. Randy Bryan saw his first trip to victory lane in the STARS Mod Lites, and the Outlaw Mini Mod feature winner was Nathan Kilwine.

Randy Bryan fought his way past then leader Joel Huggins on lap eight of the 15 lap A main for the STARS Mod Lites, and then held off the competition to score his first win at Marshalltown Speedway this year. Huggins, who was not in his usual #X50 ride, was piloting a #11X, and was second, after starting seventh. Austin Gray finished in the third position, Dustin Ford was fourth, and Ben George was fifth.

The Outlaw Mini Mods were an extra added attraction of the night, running a 12 lap feature. Ben Kraus wasted no time in getting to the lead, taking over from Michael Bryant on lap two. However, just two laps later, it was 8th place starter Nathan Kilwine, Glenville, Minnesota, in charge. The rest of the race was all Kilwine's as he motored to the checkers. Kraus held on to second place, third went to the division points leader, Kamdyn Haggard, Bryant took fourth place, and fifth went to Dalton Faber.

Up next was the 20 lap Friesen Performance Northern SportMods feature event. This one had some issues, with a plethora of yellows flying, two before even the first lap was scored. Veteran racer, Vern Jackson held down the top spot the first two laps, but it was last week's winner Kyle Olson taking over by lap four. He weathered four more cautions, but it was no issue as he pulled away each time, and won going away at the checkers. Kaylin Lopez, from Chowchilla, California and who now calls Marshalltown his home, took second. Finishing third was Jenae Gustin, fourth was Travis Petersen, and Sam Wieben completed the top five.

The Sunoco IMCA Hobby Stocks put on quite a show for the fans in their 20 lap feature. This one too, had more than its share of yellows. Eric Stanton had the lead on lap one, John Watson nabbed it on lap two, and then Stanton was right back in the lead a lap or so later. At lap five, Eric Knutson had thrown his hat into the ring, and was pressuring Stanton. Then Seth Butler, who had started twelfth on the grid, had joined in the fun. It was a tight battle up front, lap after lap, with Knutson keeping the upper hand, and now twelfth place starter Seth Butler had made it a threesome! What a battle it was and a great show for the fans. Stanton got to Knutson's bumper, and knocked, knocked, knocked a few times, but Knutson held his ground and kept the lead. At the finish line, it was Knutson taking the win, Stanton held on to second, and Seth Butler was an ever so close third. Bradly Graham and William Klosterman finished fourth and fifth.

The Sunoco IMCA Stock Cars were next on the agenda for their 20 lap affair. It didn't take long for Kaden Reynolds to be in command taking his ride from sixth to the top spot by lap three. Flying through the field quickly as well was Santa Maria, California's Dylan Thornton. He had made his way from tenth to run in second with just a handful of laps in the books. Thornton threw a couple of sliders at the leader in turn four, but Reynolds wasn't fazed, and kept his cool. In the closing laps, Reynolds pulled away, and took the comfortable win. Thornton finished a distant second. Steve Meyer was third, Marshalltown's own Jeff Wollam was fourth, and Michael Jaennette rounded out the top five.

The night's racing action ended with the Friesen Performance IMCA Modified 20 lap A main. This one was led from start to finish by rookie to the class, Dallon Murty. He had the field covered easily, and won this one going away. No stranger to victory lane in the Stock Car class, this was his first in the Modified class at Marshalltown, after having just snagged his first career win in the class at Vinton recently. Jimmy Gustin got by Joel Rust in the closing laps as they finished second and third respectively. Hays, Kansas racer, Dakota Sproul started tenth, and took fourth place, and Dustin Kroening, Hebron, Illinois, was fifth.

Regular weekly racing continues next Friday night, May 27, when it will be $500 on the line for the Northern SportMods, and the Mod Lites will have one of their Corn Belt Clash events. The IMCA Mach-1 Sport Compacts and the Karl Chevrolet Dirt Trucks are also scheduled to be in action. The green flag drops at 7:30. 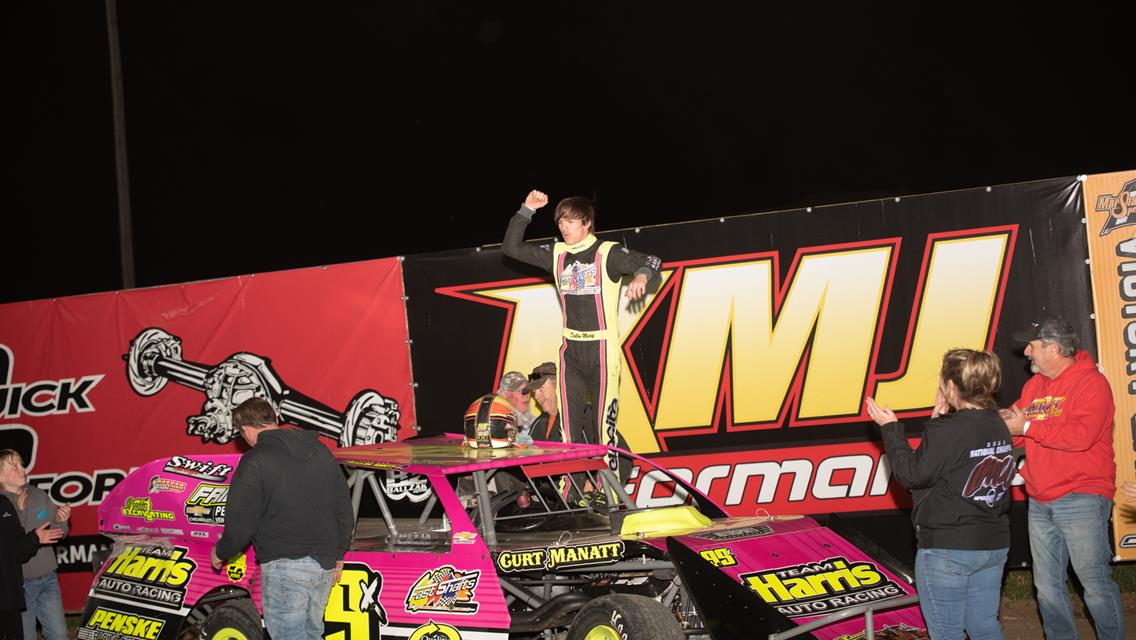 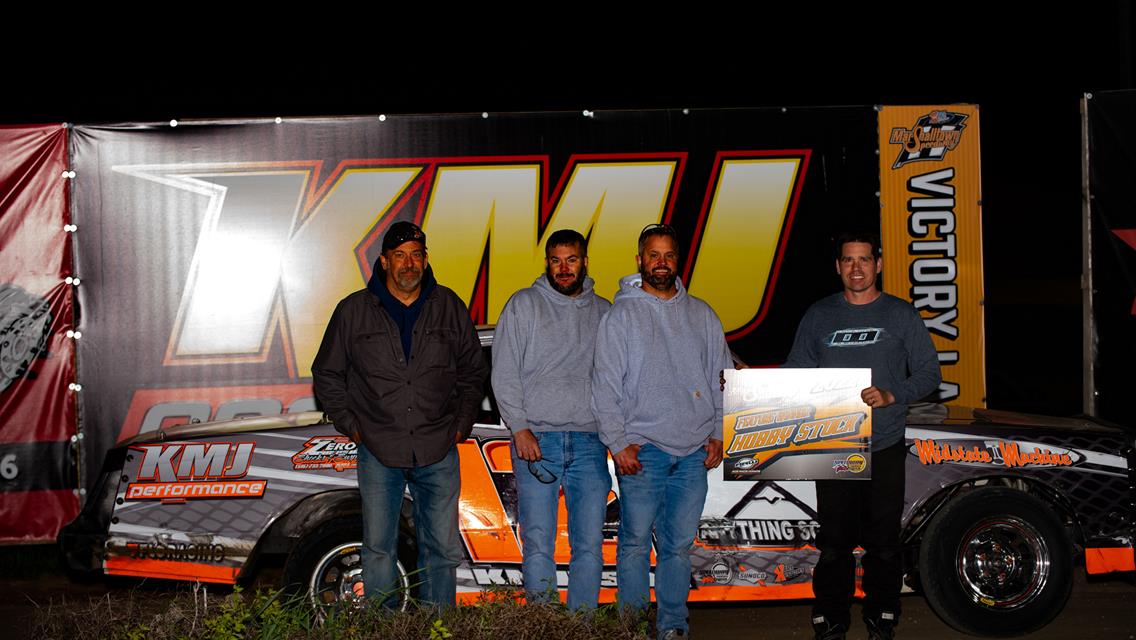 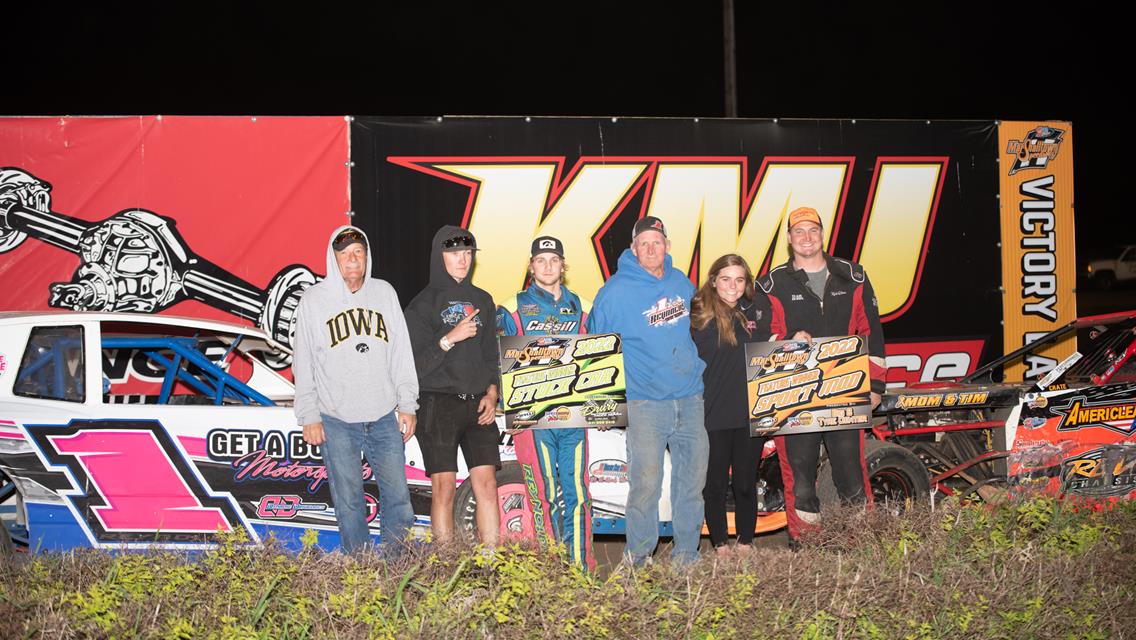 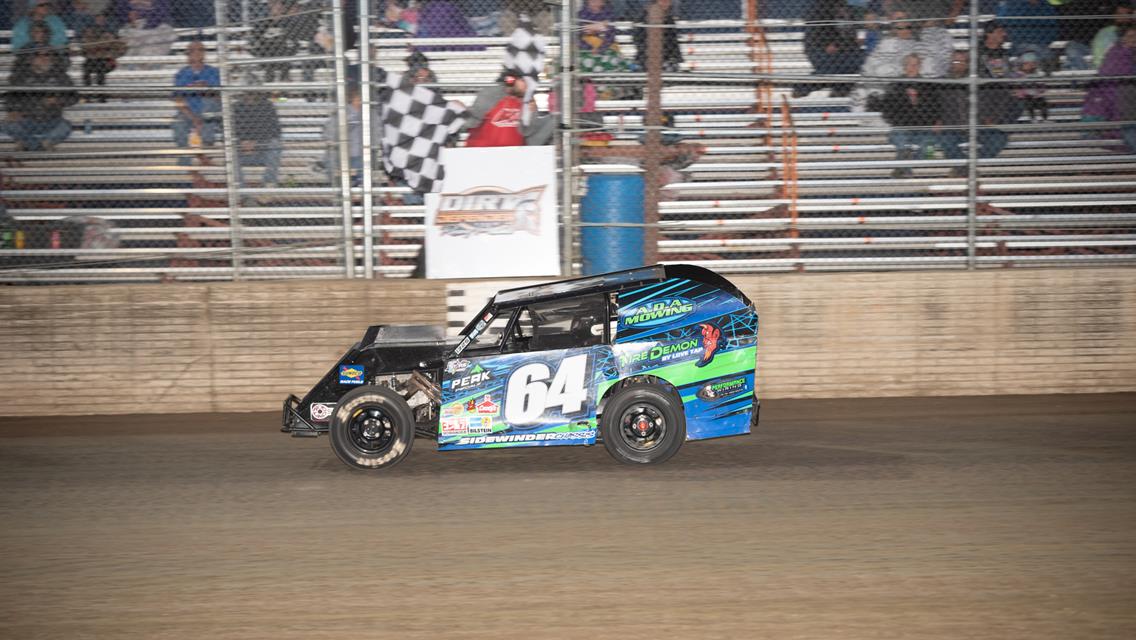 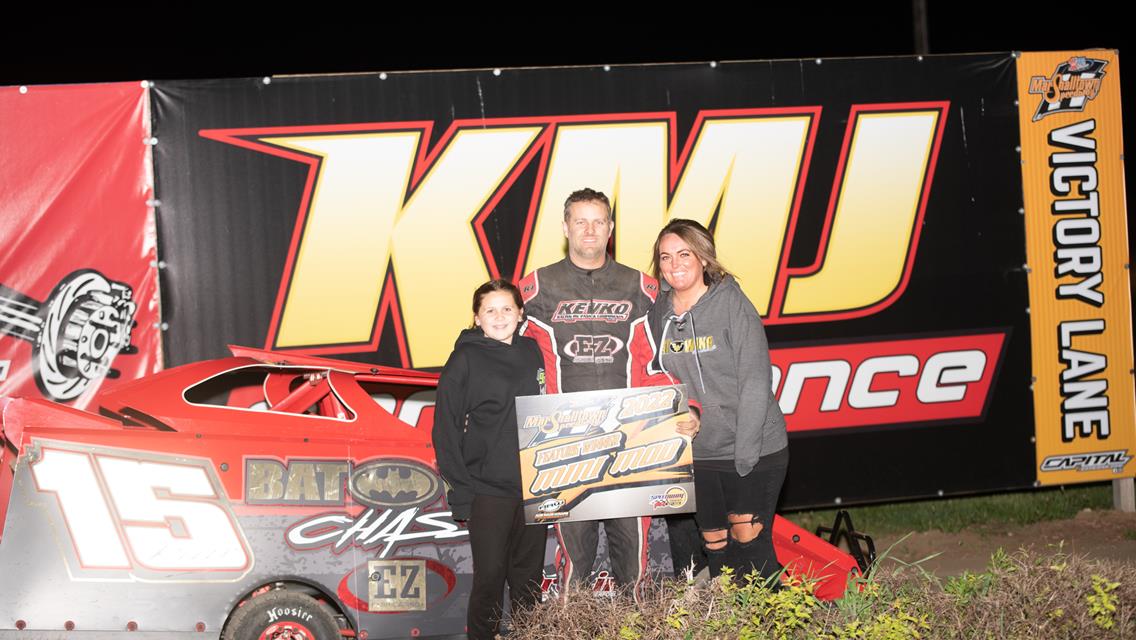 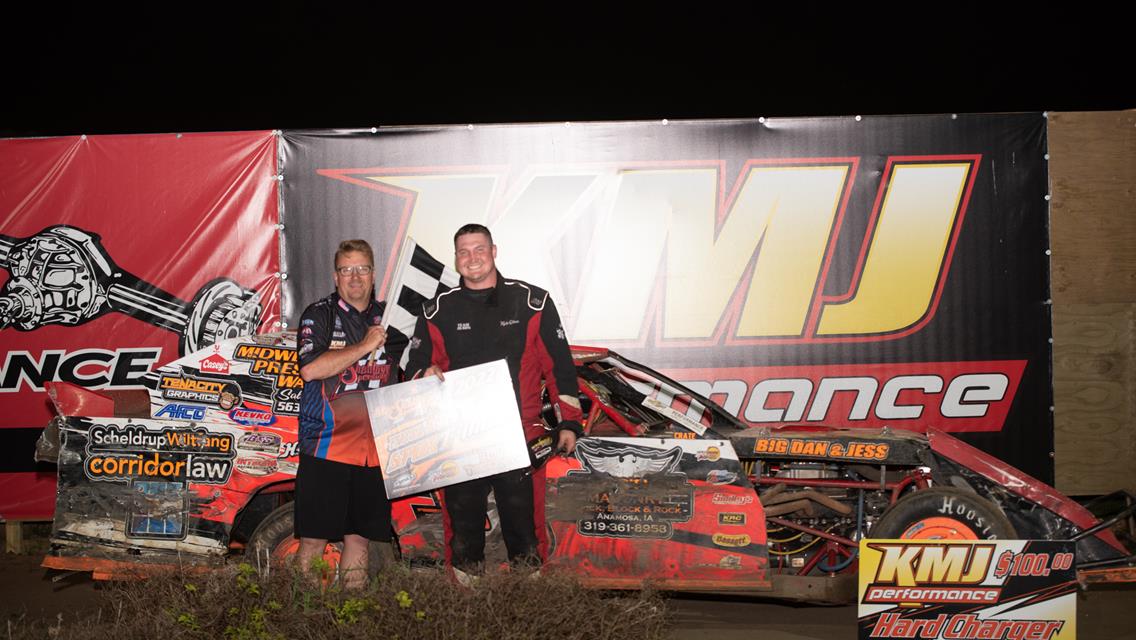