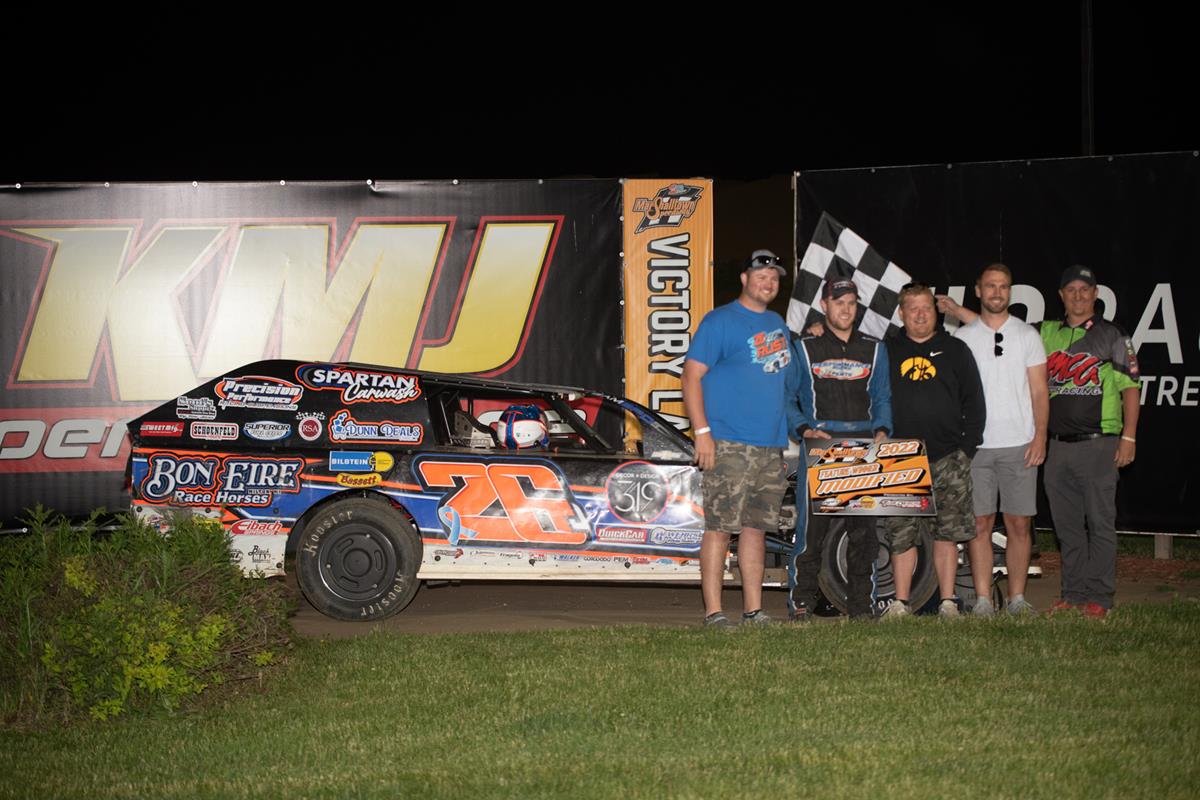 Joel Huggins jumped to the lead in the STARS Mod Lite 15 lap feature and was sailing along in good shape as he led the field, but Randy Bryan was soon reeling him in. Bryan swung to the topside, and made the pass out of corner four as lap nine went into the books. Bryan kept that lead the remaining distance to the flying checkers and the win. Huggins didn't go away though, and finished a close second. Trailing a distant third was Josh May, who made his first appearance at the track this year. Cory Sonner came from tenth starting spot, to finish fourth, and Gary DeWitt, Mesa, Arizona made the haul up to Iowa to try his hand on the Iowa dirt, and finished fifth. This was Bryan's second win at Marshalltown this season. The race went flag to flag.

The IMCA Northern SportMods saw Chance Titus lead the troops through the first nine laps of the 20 lap feature, but Kyle Olson was quickly on his tail with just a handful of laps in the books. Olson took to the top shelf of the track and was able to make the pass on lap eleven, and from there on, never looked back on his run to the checkers. Travis Peterson took the runner up position, with Sam Wieben taking third place. Fourth went to Kaylin Lopez, and Jason York started eleventh, and finished fifth. Only one caution slowed the action in the race, but was no issue for Olson who got his third feature win of the year.

John Watson led the IMCA Hobby Stock 20 lap main event from wire to wire, taking the win going away. There was a good battle going on behind the leader during most of race between several cars. In the end it was twelfth place starter Bradley Graham holding off eleventh place starter Eric Knutson as they finished second and third respectively. Corey VanDerwilt was in the mix at the front of the pack the entire race, and finished fourth, and William Klosterman completed the top five. After an initial no go that was called back, the race went caution free. This marked Watson's second win in as many weeks at the High Banks.

The IMCA Sport Compacts were back in competition last evening, and they ran a 12 lap feature that went nonstop. Matt Miller, polesitter, was the early leader, but fifth place starter Blake Driscol was quickly into second when lap one was scored. The two toyed with each other for several laps as Driscol kept peeking for a way around. Lap eight became that lucky one for Driscol as he took over the lead. Driscol kept to the top of the track as he held back Miller who ran the lower line. For Driscol it was the right line to run as he crossed the finish line first with the checkers flying to secure his first win at Marshalltown. Miller had to be content with second place, and Curtis Masterson, Mark Smith, and Danny Robinson rounded out the top five.

The IMCA Stock Car 20 lap feature had some close racing, but most of it was behind winner Austin Kaplan. Kaplan led the entire race and made his first trip to victory lane this year. It was fast and furious action behind the leader most of the circuits, as Michael Jaennette, Kaden Reynolds, Damon Murty, and Jeff Wollam were duking it out constantly. Kaplan would pull away from that action and take an easy win. Jaennette claimed second place, veteran hometown racer Jeff Wollam had a great run, coming from thirteenth to finish third. Kaden Reynolds took fourth, with Damon Murty a close fifth place. The race only had one caution fly to interrupt the racing action, that coming at lap nine.

The IMCA Modifieds put a night cap on the racing with the running of their 20 lap A Main event. This one turned into a runaway. Jacob Murray led lap one, but it was Joel Rust taking over at lap two, and then pulling away. Jacob Murray and Ronn Lauritzen ran second and third respectively for much of the race, but at the finish line, it was Lauritzen sneaking by to grab second, Murray going third. Ethan Braaksma was fourth and Gat Leytham took fifth place. This fast paced race also went flag to flag, and marked the second win of the season for Rust. 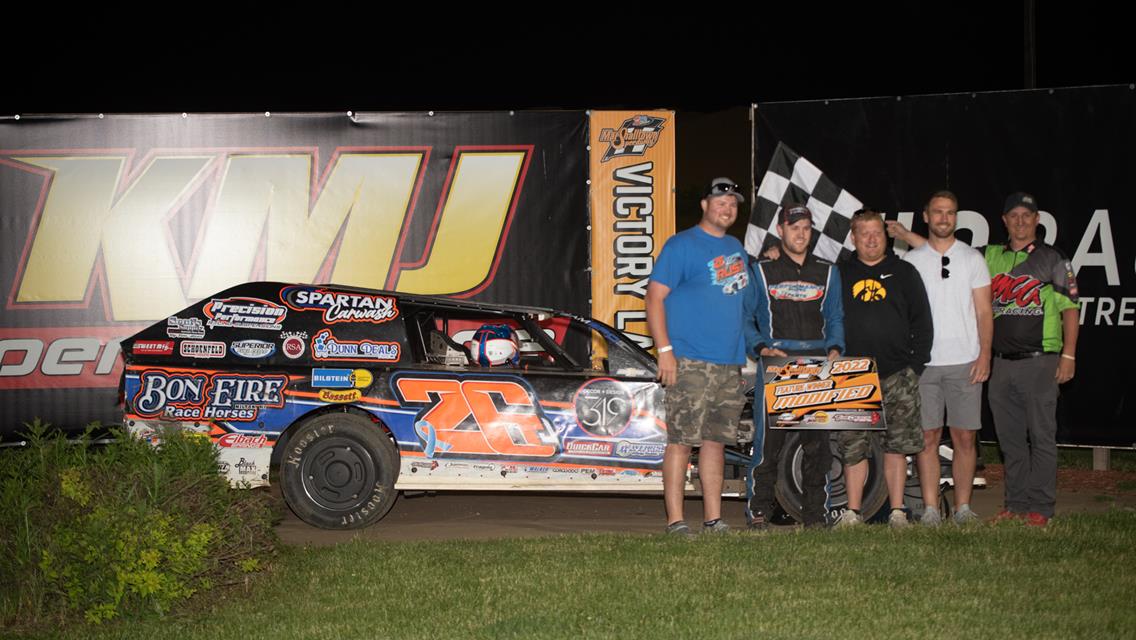 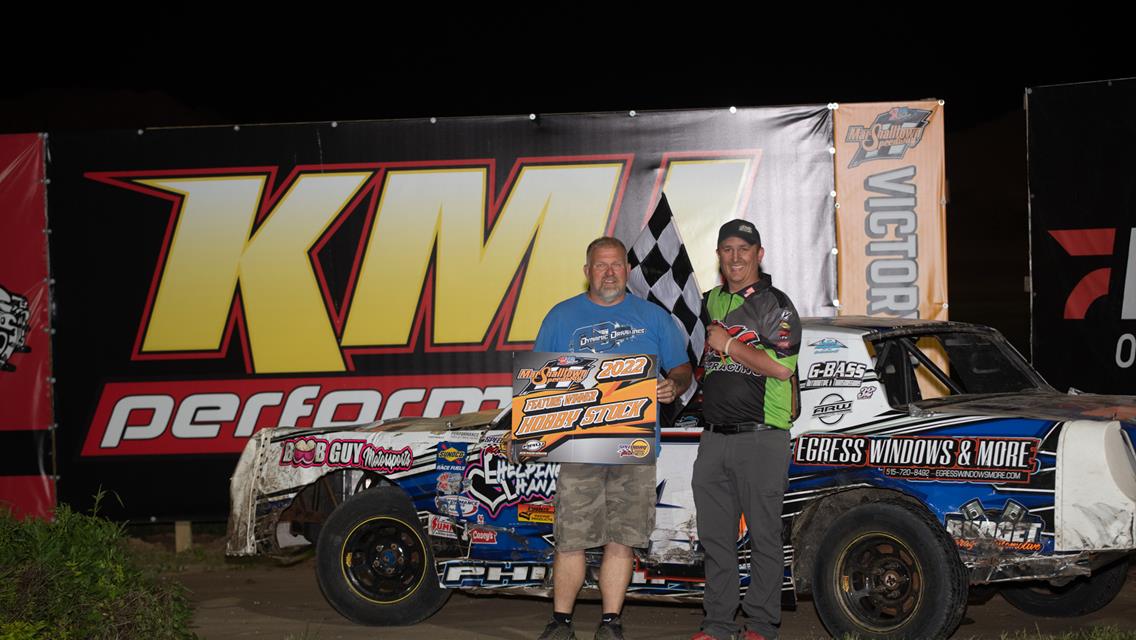 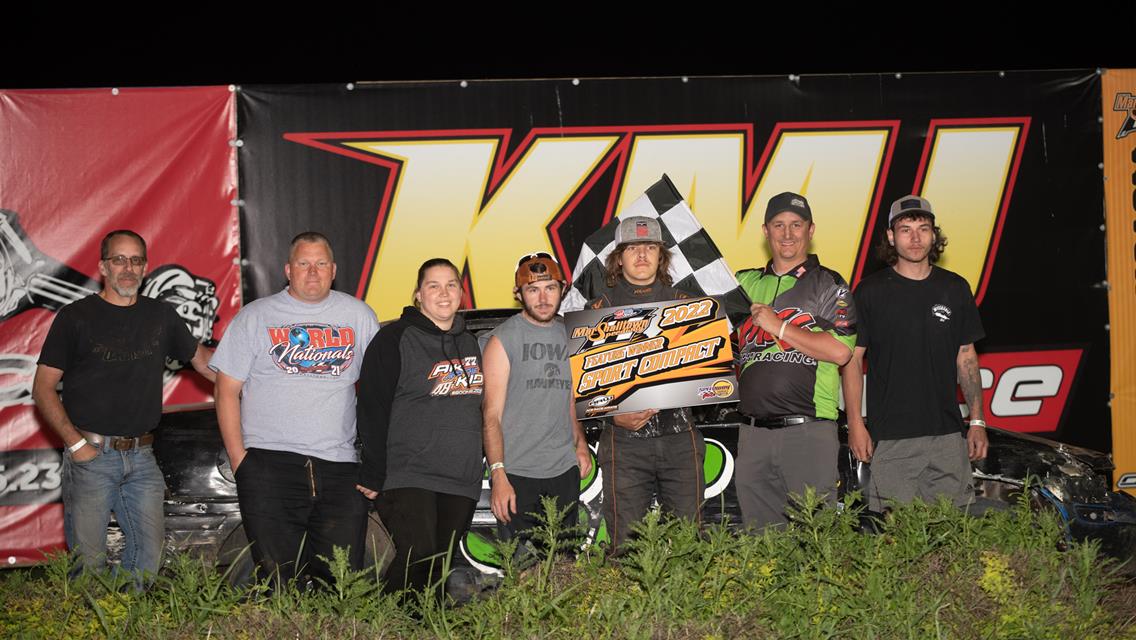 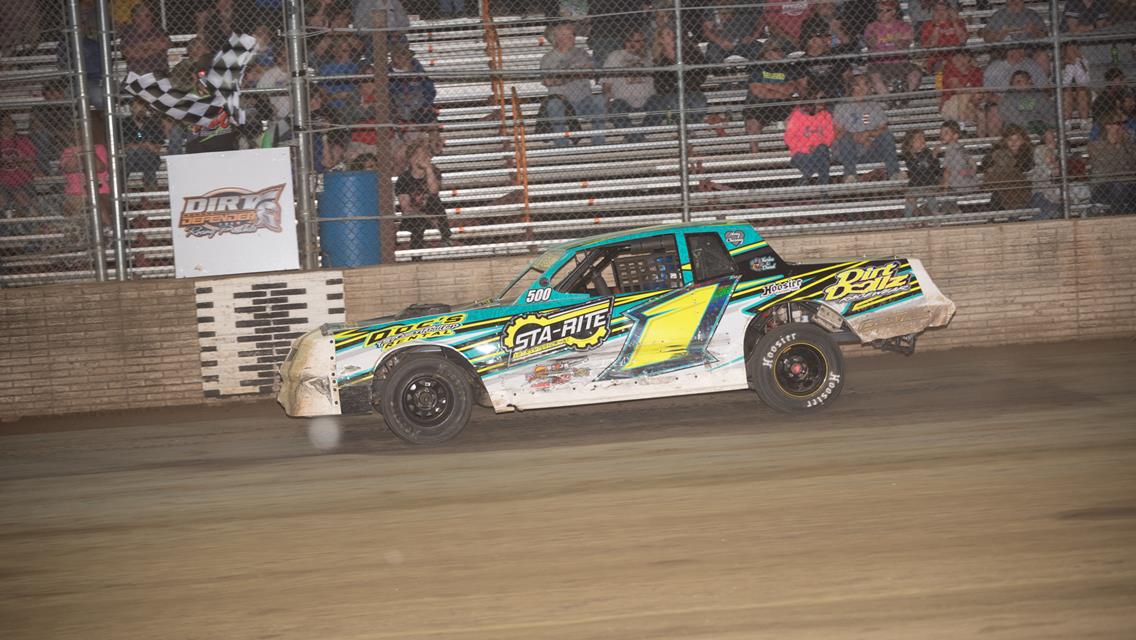 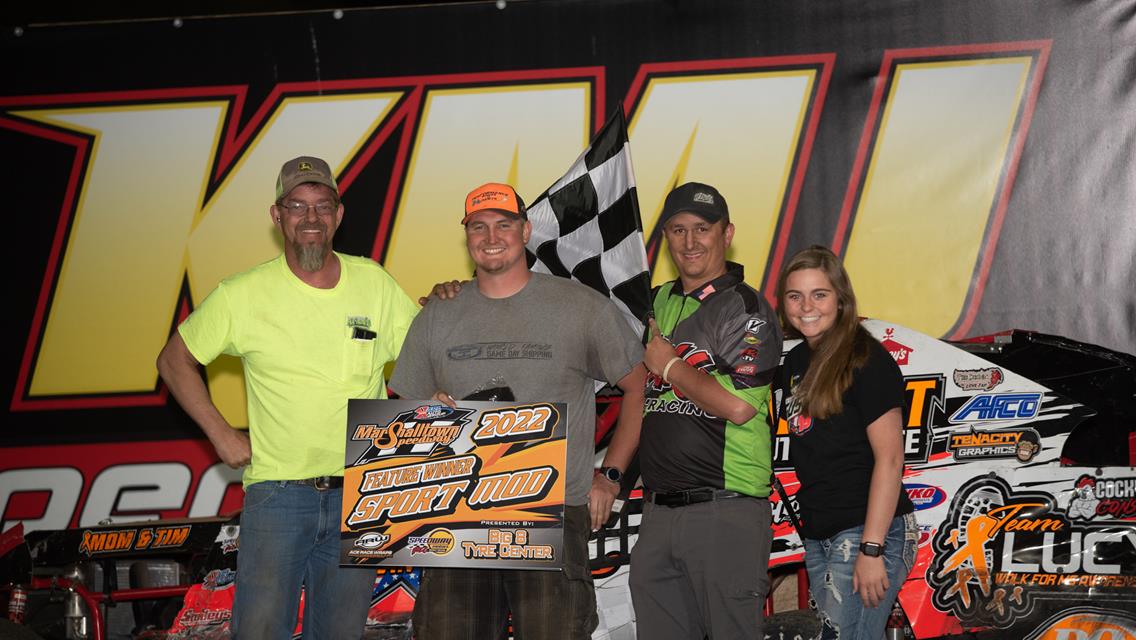 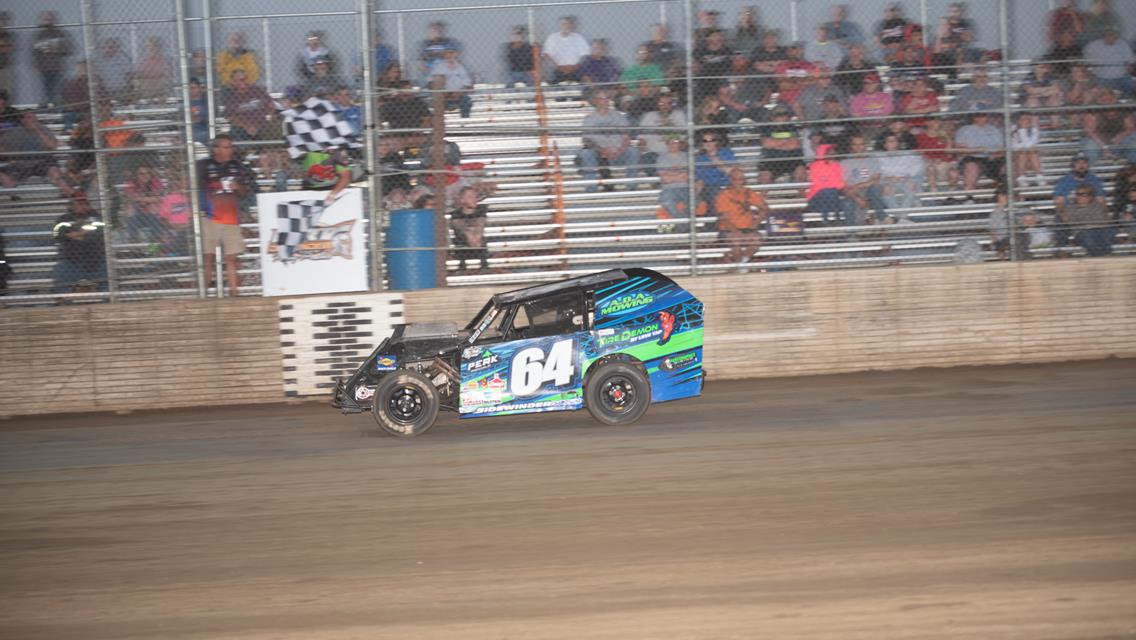