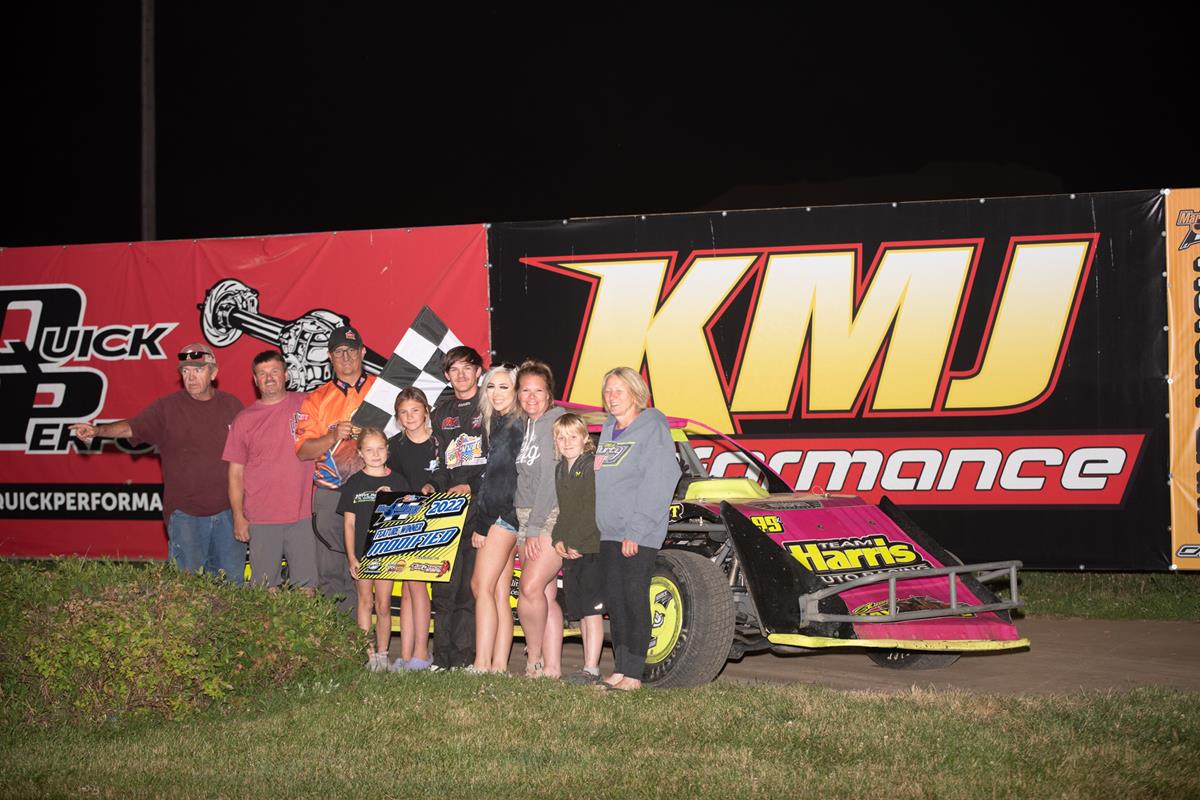 It was Capital Sign Company Night at the Races at the Marshalltown Speedway Friday evening. Over 130 cars filled the pits for a full night of racing. Good weather and the anticipation of the racing action brought out a good crowd to kick of the 4th of July holiday weekend.

Twenty-three drivers were on hand for the IMCA STARS Mod Lites. They ran a 20 lap feature that paid $100 just to start, thanks to an anonymous donor.

Joe Glick led from start to finish in the main event, but had to outlast the constant challenges of Joel Huggins through most of the race. They ran side by side at times, but Glick never flinched, and kept his cool to take the flying checkers and the win. Huggins took the runner up spot. Visiting racer Michael Raffurty from Kansas City, Missouri took third after starting thirteenth. Fourth went to last week's winner, Randy Bryan, and making his first appearance of the year at the track, Charlie Brown started sixteenth, and finished fifth. This was Glick's first win of the season at the track.

The IMCA Northern SportMods were up next for their 18 lap feature. This race was marred with caution flags, two before the race even got started. When the fourth yellow came out, Jenae Gustin had just taken the lead, and though several more caution interrupted the race after that, Gustin was able to maintain the top spot and take the win, much to the delight of the crowd. This was Gustin's first win at the track this race season.

Shane Paris, Muscatine, Iowa made his first trip to Marshalltown this year, after his usual Friday night track was rained out. He started tenth, and took second place. Tony Olson was third, Sam Wieben came from fifteenth starting position to finish fourth, and Bakersfield, Californian, Matthew Mayo was fifth.

John Watson took home his third victory at the High Banks this year when he won the 20 lap IMCA Hobby Stock feature. Bradly Graham, last week's winner was looking to repeat, though Watson had caught him and was following in his tire tracks lap after lap. With just a handful of laps remaining, Graham slipped off the top of turn two, bringing out a yellow, and putting himself out of the running.

The final five laps, Watson had it well in hand, and took the checkers, adding to his winning year at Marshalltown. Seth Butler got by Ryan Havel in the closing moments as they went second and third respectively. Tipton, Iowa's Daniel Wauters was also a first timer at the track. He started sixteenth and finished fourth. William Klosterman rounded out the top five.

Steve Meyer looked strong all race long in the IMCA Stock Car 20 lap feature. Meyer had the lead on lap three, took to the top of the track and was pulling away. A caution stopped the racing action on lap fourteen, erasing his comfortable lead.

Meyer maintained his lead as the race returned to green, but two more cautions would deter his run. He was able to hold off the challenges of two hard charging #1's in the final circuits. Austin Kaplan squeaked by Kaden Reynolds in the closing moments as they took second and third in that order. Dave Atcher finished fourth, and veteran Jeff Wollam finished fifth. This was Meyer's first trip to Marshalltown Speedway's victory lane this year.

Jimmy Gustin has been getting closer and closer to getting that IMCA Modified win this year, and Friday night it was looking to becoming a reality. Gustin started ninth, and was leading by lap three. Gustin broke loose from the pack, but brought Dallon Murty along to run in second. The two ran the rim of the track, Murty giving it a look for a way around, and also attempting a failed slider at one point. He then settled back in behind Gustin as they continued to circle the top of the track.

As the laps wound down, lap traffic was beginning to play a factor, and it was lap fifteen that became Gustin's undoing. Two slow lap cars were right in front of leader Gustin as he exited corner four, and Murty opted for the low road.....Gustin caught behind the slow cars. Murty took the lead and just after the lap was scored, another caution came out. On the restart, Murty kept command, and held it to the flying checkers....his third this year. Drew Janssen, Pella, Iowa also managed to get around Gustin in the final moments, as they finished second and third respectively. Montezuma, Iowa's Maguire DeJong finished fourth, after starting eighteenth, and Zach Rawlins was fifth.

Kolby Sabin had the IMCA Sport Compact 15 lap event well in hand from lap two on. He pulled away from the rest of the field, and as the checkers flew, had a good half-lap from his nearest competitors. It was a close one at the finish line, but John Gill took second, just beating out Tyler Fiebelkorn in third. Chad Larson, and Mark Smith were fourth and fifth. This was Sabin's second win at the track this season.

The next race at the Marshalltown Speedway will be Thursday, July 7 when it will be the postponed Dale DeFrance Memorial. The headliner will be the SLMR Super Late Model Dirt Series. The IMCA Modifieds, Stock Cars, Northern SportMods, and Hobby Stocks will also be competition. Gates open at 5:30, hot laps are 6:55, and the green flag drops at 7:30. Please note, there will be no racing on Friday, July 8. 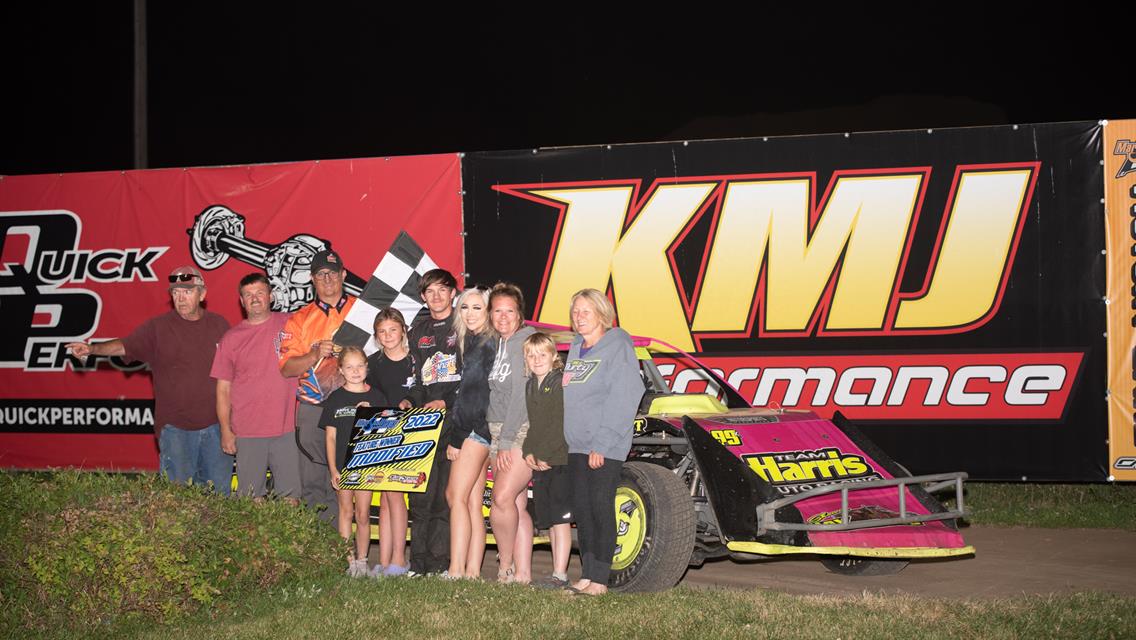 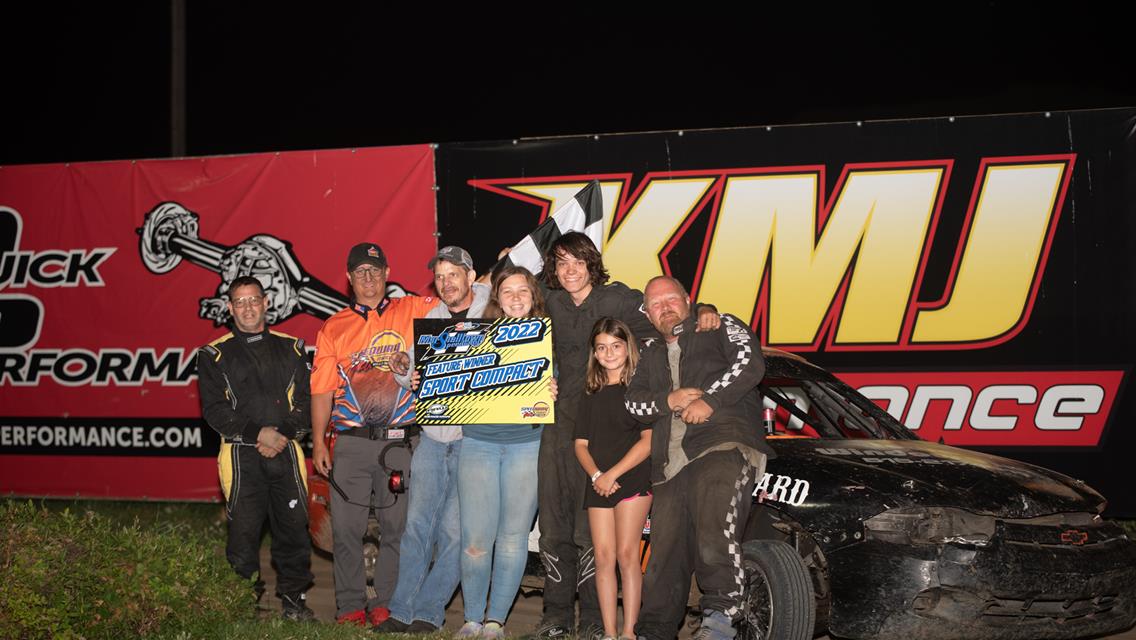 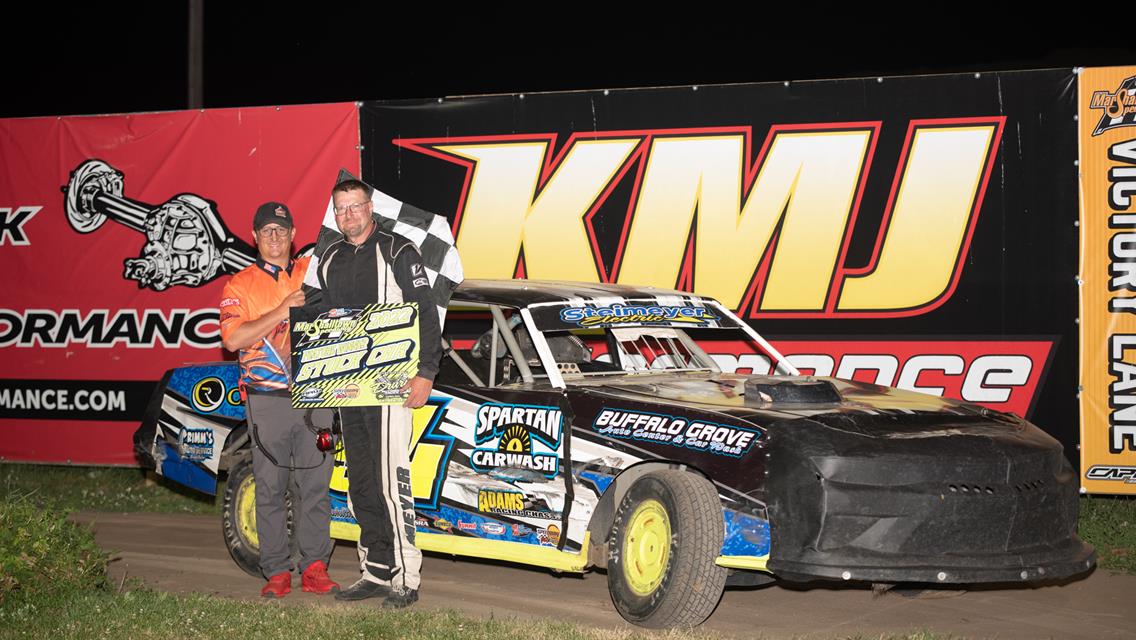 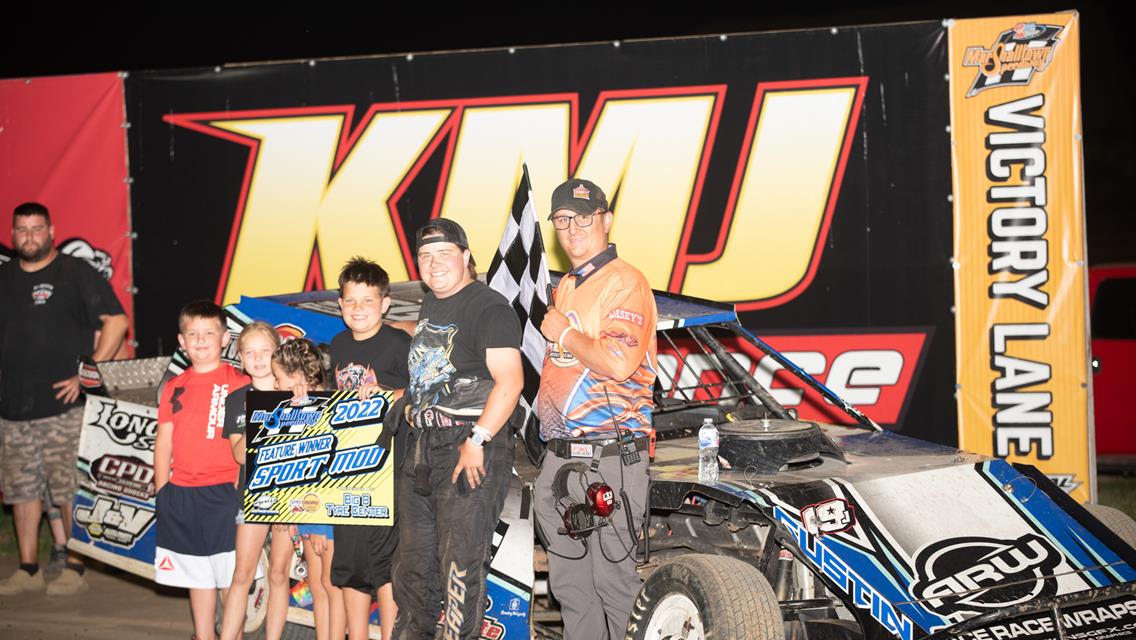 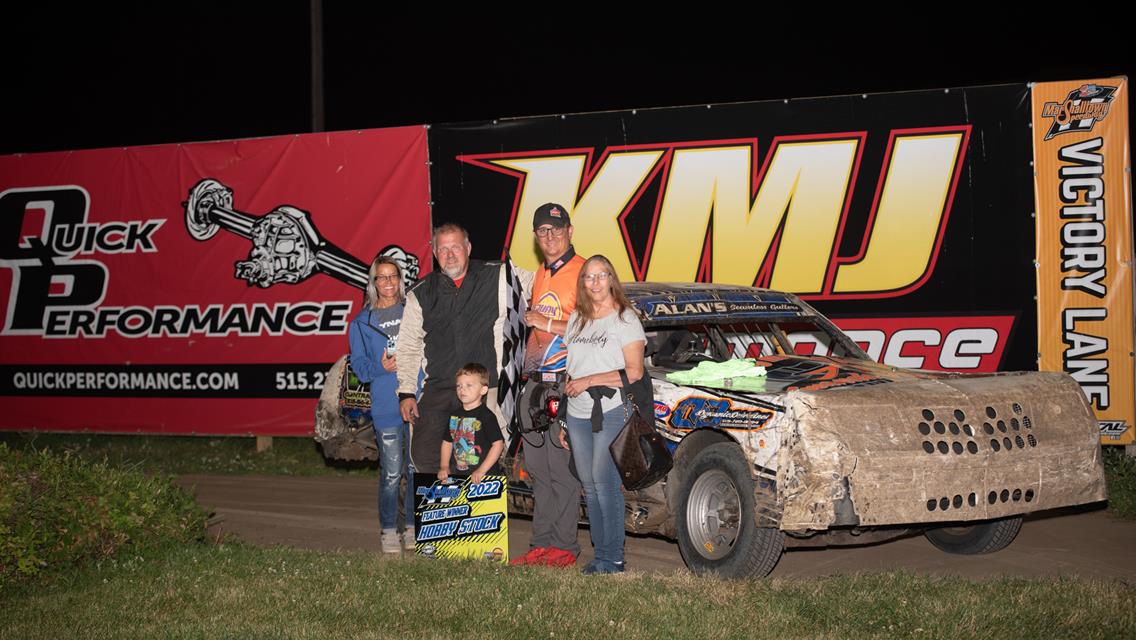 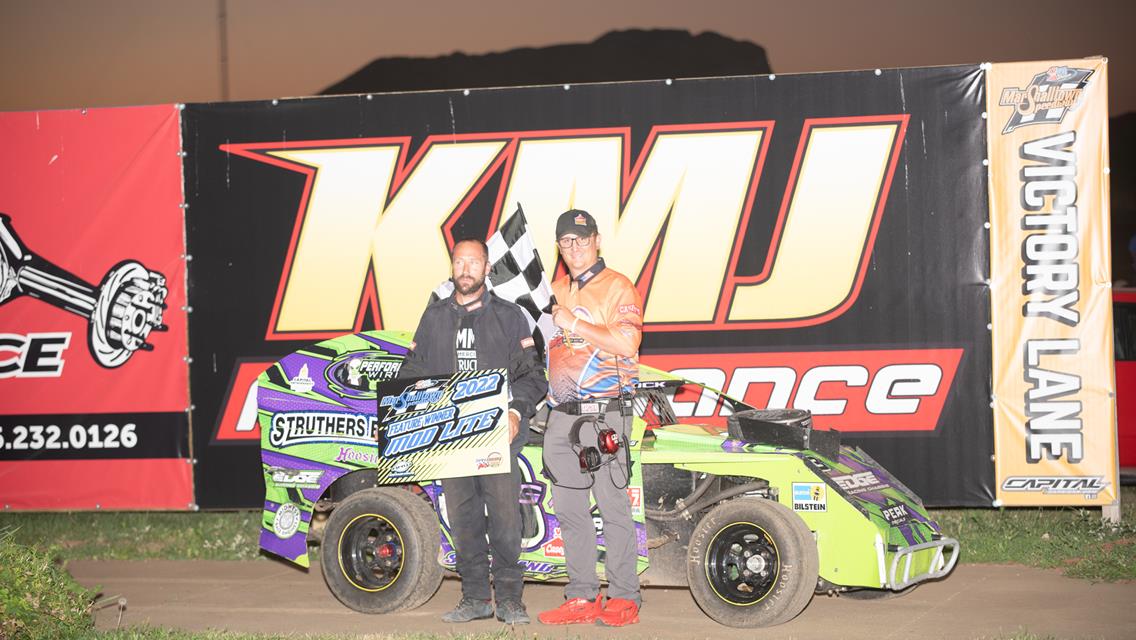 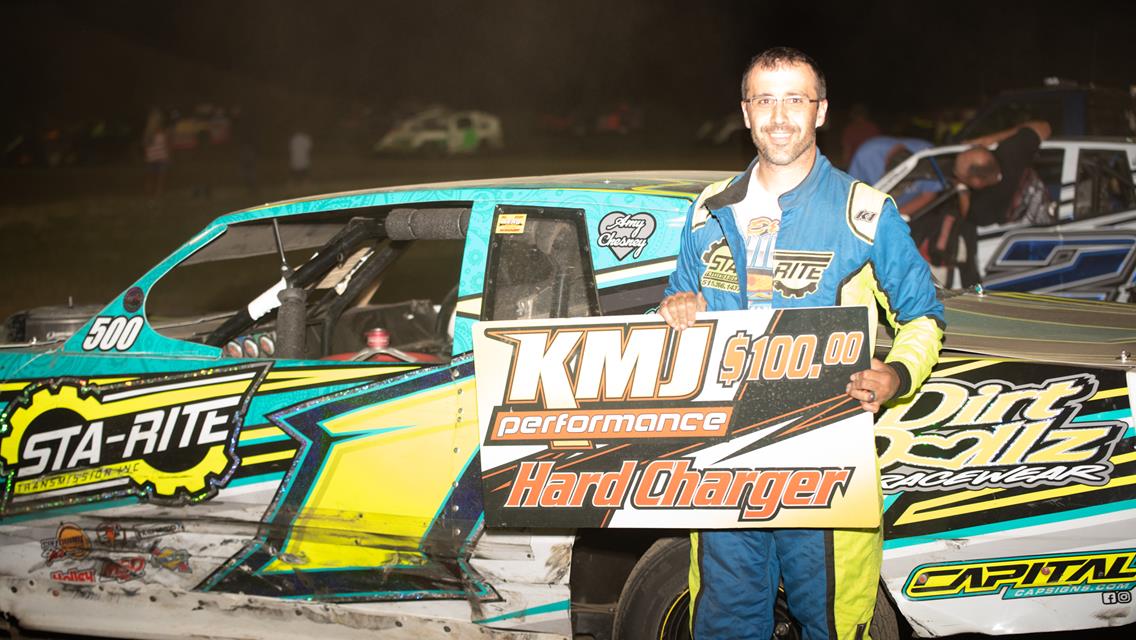 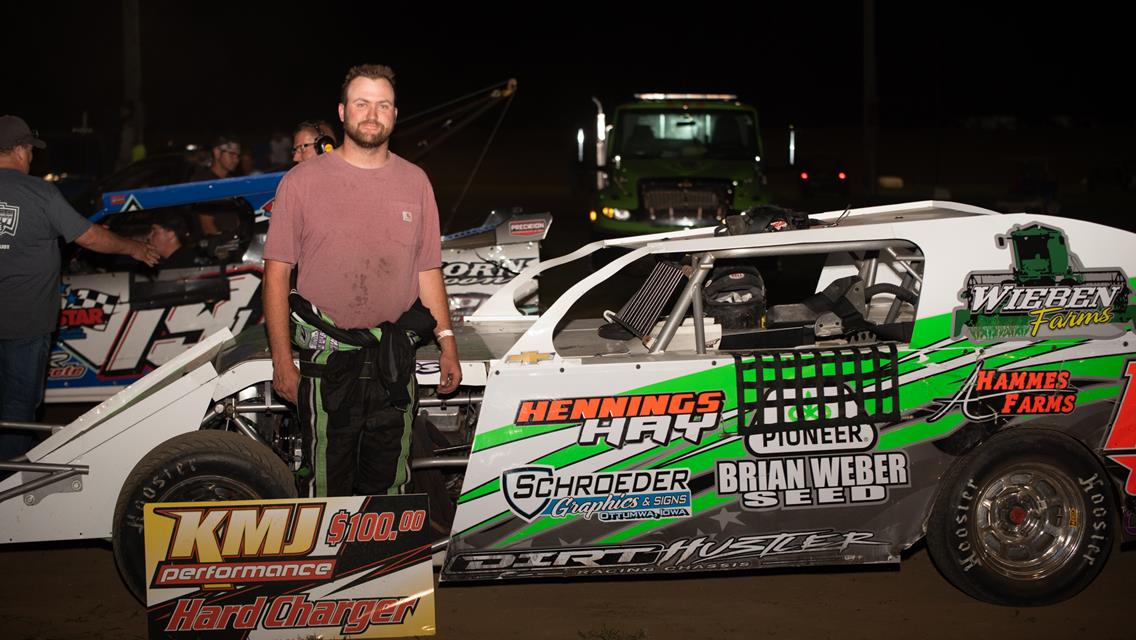 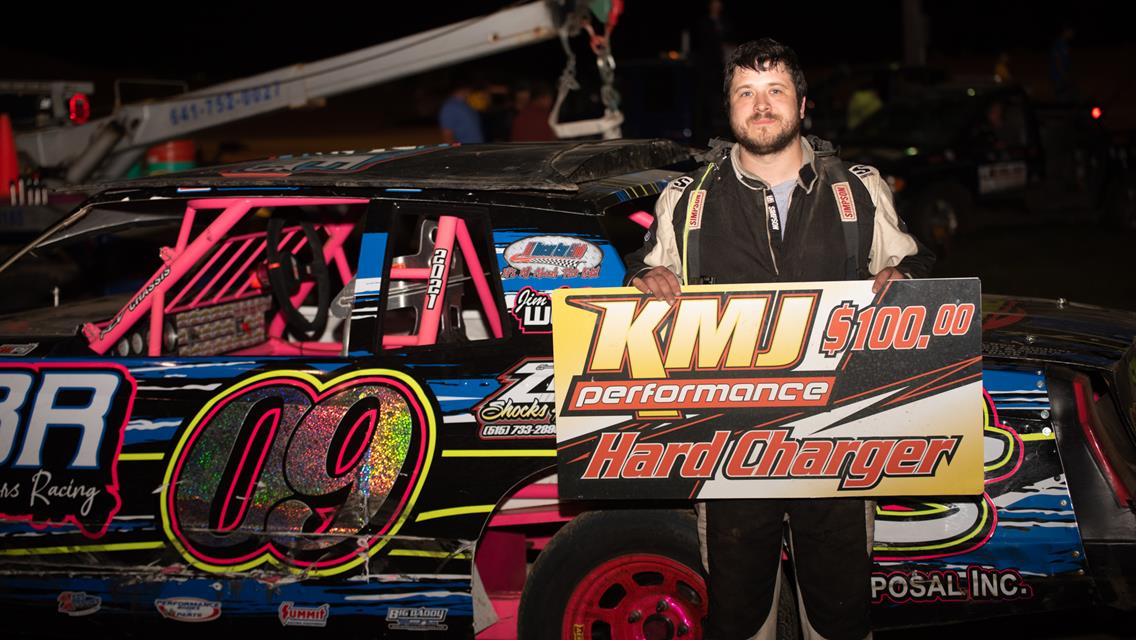 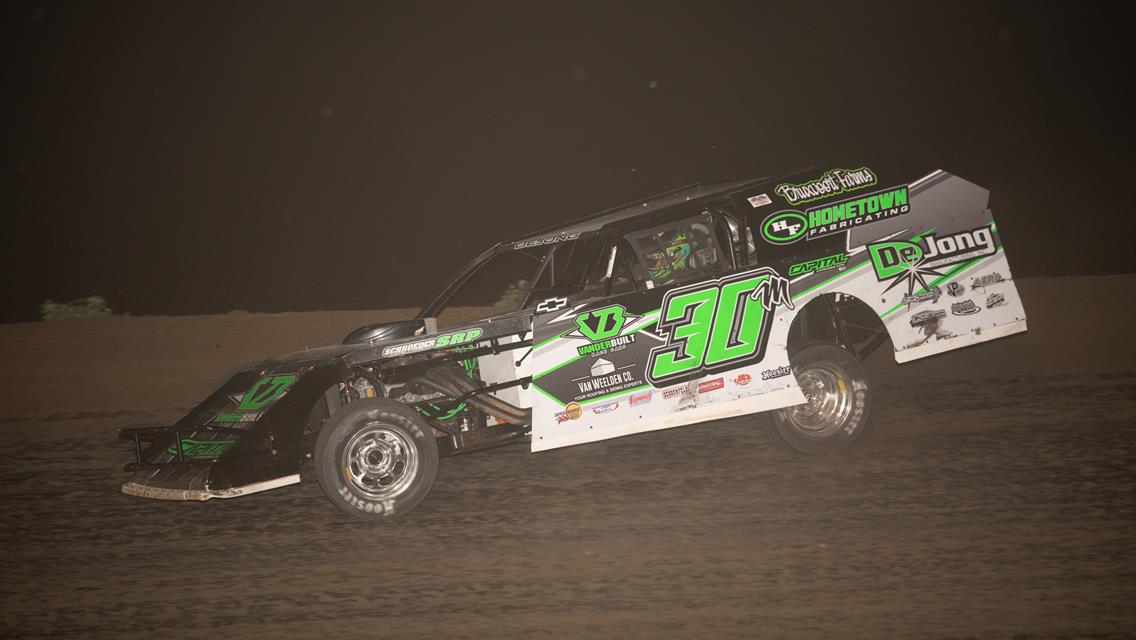