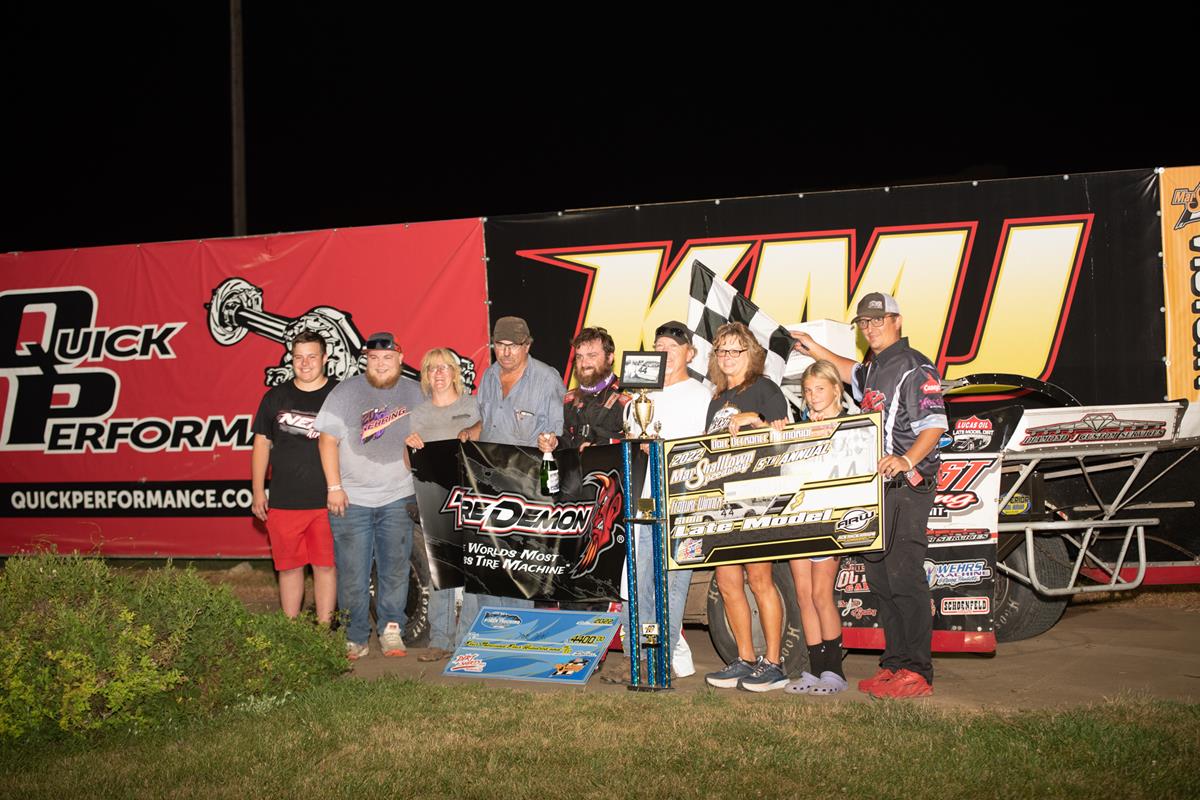 The pits as well as the stands were full at the Marshalltown Speedway on Friday evening. One hundred forty-six race cars checked in for the 5th Annual Dale DeFrance Memorial race. Sponsors for the night were Iowa Seamless Gutter and P & D Welding Solutions. The Hoker Trucking SMLR Super Late Models and the Karl Chevrolet Dirt Trucks joined the IMCA Modifieds, Stock Cars, Northern SportMods, and Hobby Stocks for the racing action.

It was not a track points night for the IMCA classes, but National, Regional, and State points were awarded, and extra money was on the line in the draw/redraw show. All drivers left with extra money or product certificates, and the winners went home with beautiful trophies.

The IMCA Sunoco Hobby Stocks kicked off the night's feature racing. This one was led all 20 laps by Garrison, Iowa's Joren Fisher. Fisher started on the pole and kept it at the front to take the checkers. It was a battle between Jacob Floyd and Eric Knutson behind the winner, with Knutson taking second place on the final lap, and tenth place starter Floyd going third. Seth Janssen was fourth, and Bradly Graham started thirteenth, and finished fifth.

The IMCA Friesen Performance Northern SportMods saw Logan Anderson pull away in the second half of the 20 lap A Main and win going away. He finished well ahead of second place Brayton Carter, who he caught and passed on lap nine. Tony Olson was third, fourth went to Izac Mallicoat, and twelfth place starter Matt Avila from Prescott, Iowa rounded out the top five. Anderson, who started seventh earned himself $500 for the win.

The headliner for the evening was up next for 44 laps of SLMR Super Late Model feature racing. The 44 lap event honored the car number of the late Dale DeFrance. The much anticipated race had been postponed twice prior due to weather, but the third time was the charm on Friday night.

Thirty-seven Late Models were on hand, and after heat races, two B mains, and two provisionals were added, the 26 car field was set for 44 laps and a payday of $4,400.

Tad Pospisil, Norfolk, Nebraska was the early race leader with Omaha's Jake Neal tucked in on his tail. The two went at it for lap after lap until Neal was finally able to slip into the lead on lap fourteen.

The second half of the race, with Neal still in command as he circled the rim of the race track, now had Luke Goedert to contend with. Heavy lap traffic came into play in the closing laps. Goedert was able to briefly take the top spot away, but Neal came right back and regained the lead. He was then able to hold it to the flying checkers and win the Dale DeFrance Memorial. Goedert finished in second, third place was Andy Eckrich, Joel Callahan started eleventh and finished in fourth, and Jeff Tharp completed the top five.

The Class too Tough to Tame, the IMCA Sunoco Stock Cars were running for $750 in their 20-lap feature.

Chelsea, Iowa's Damon Murty came away with the prize in the Stock Car class. Murty started sixth, and shot through the front runners and into the lead by lap six. He ran the rim of the track while he was content to let them duke it out for position behind him.

A couple of late race cautions made for some interesting restarts. However, Murty protected his lead, was able to get back to the top, and race his way to one of his many victories at the track.

Misfortune caught two of the front runners near the end of the race when they got together in turn one. Taylor Kuehl and Dave Atcher had been fighting for second spot when they had their night end for a chance at the podium.

Kaden Reynolds came on strong in the closing moments to race his way to second place. Buck Schafroth, Orient, Iowa just got by Leah Wroten at the finish line as they went third and fourth respectively. Marshalltown's own Scott Rice raced from twelfth starting spot to finish fifth.

The IMCA Friesen Performance Modifieds were vying for a $1,000 pay day and a spot on the ballot for the Fast Shafts All-Star race at the IMCA Super Nationals.

Jake McBirnie, in his beautifully wrapped Salute to Veterans car, started on the pole, and kept it there all 20 laps of the the feature race. Joel Rust and Tim Ward harassed the leader at times, but they never were able to shake him, as McBirnie went home to the checkers and the win. Rust was able to hold back Ward as they finished second and third respectively. Veteran racer Jeff Aikey came from fifteenth starting spot to take fourth place, and it was Gatlin Leytham taking fifth.

The night's racing ended with the Karl Chevrolet Dirt Trucks. Todd Cooney led from the drop of the green, was annoyed by son Shawn Cooney at one point, but then pulled away and took the night cap win. Shonn Mapes made a late race charge, got by Shawn Cooney on the final lap and finished second, Cooney going third. Fourth was Rick Clark, and Lucas Richardson finished fifth. 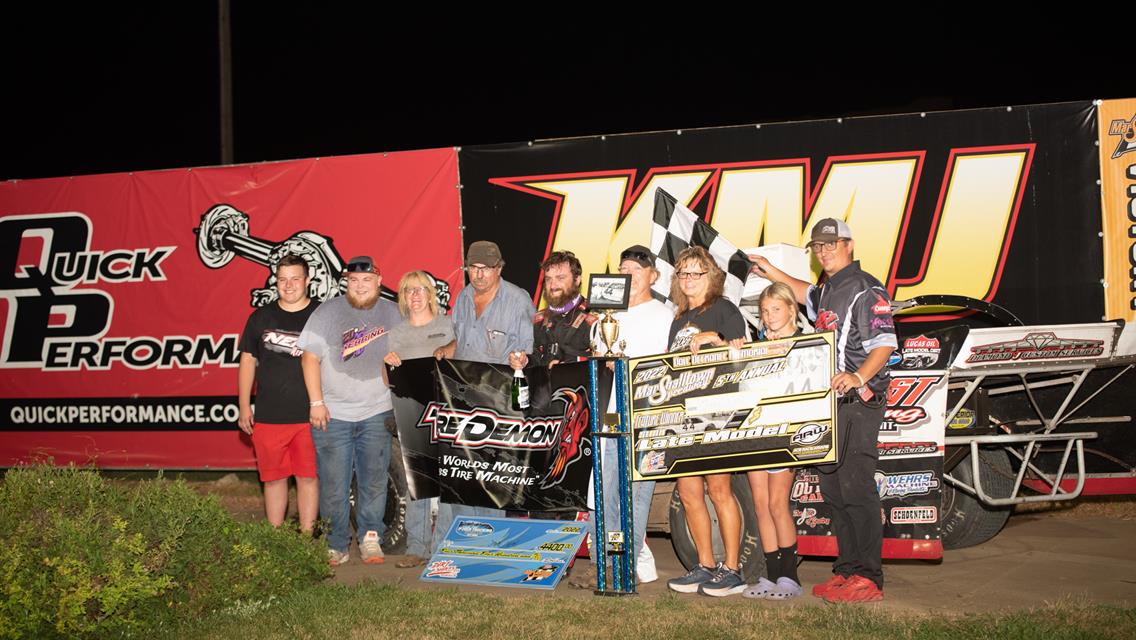 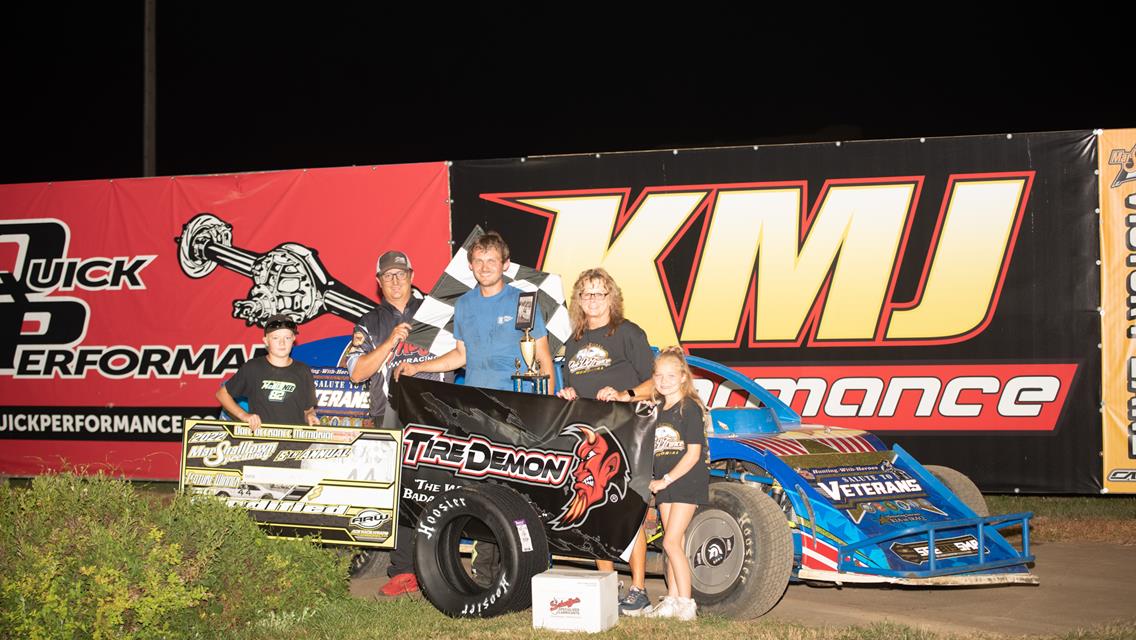 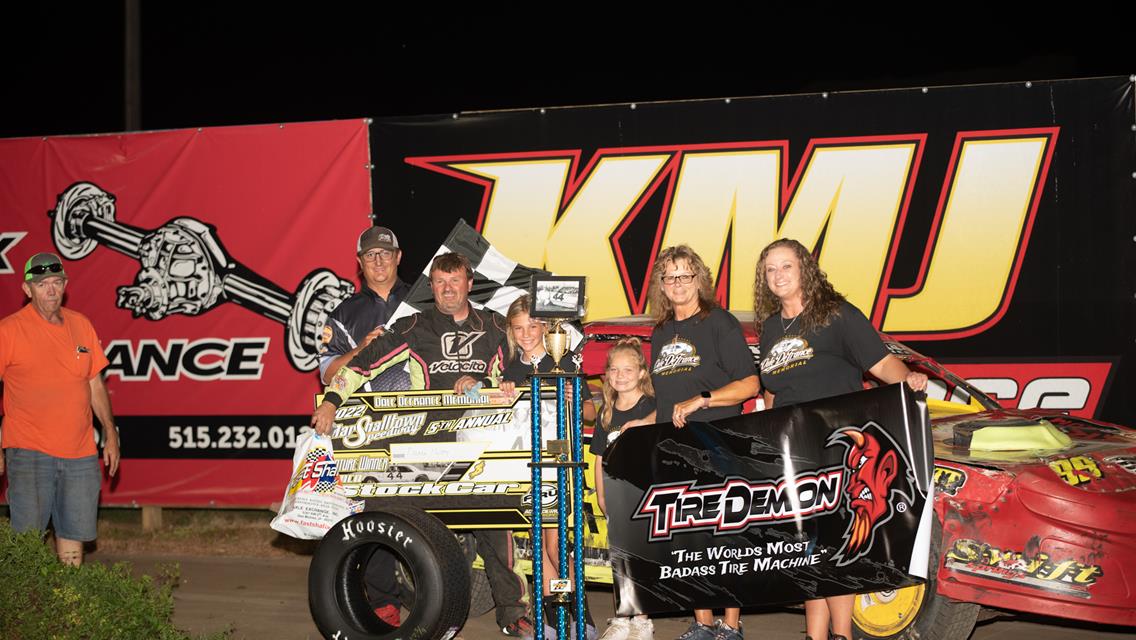 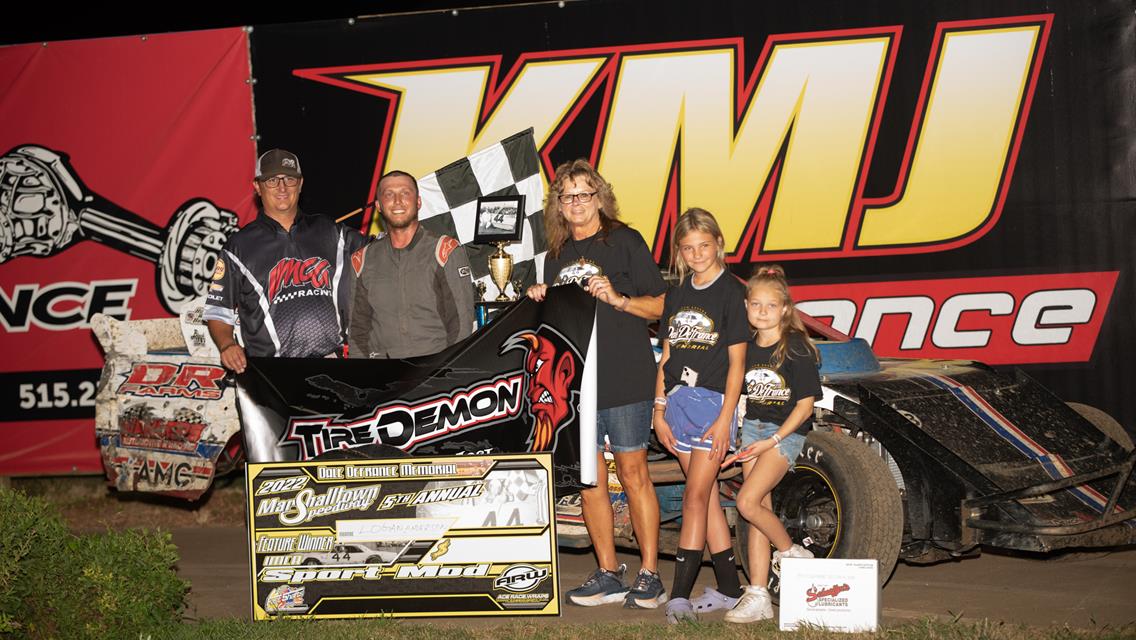 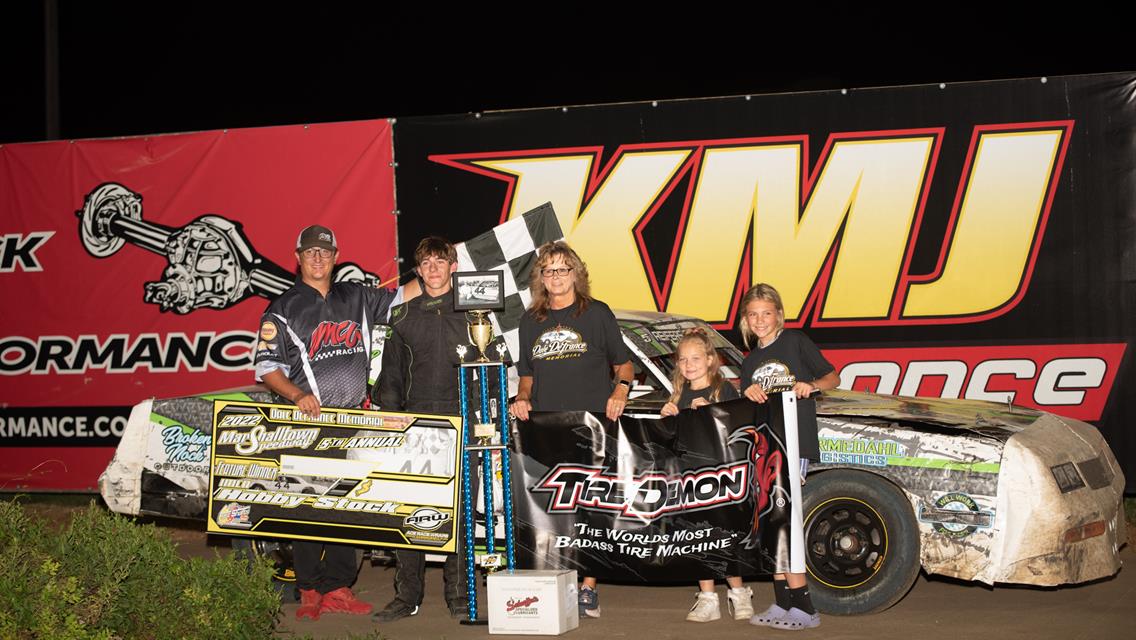 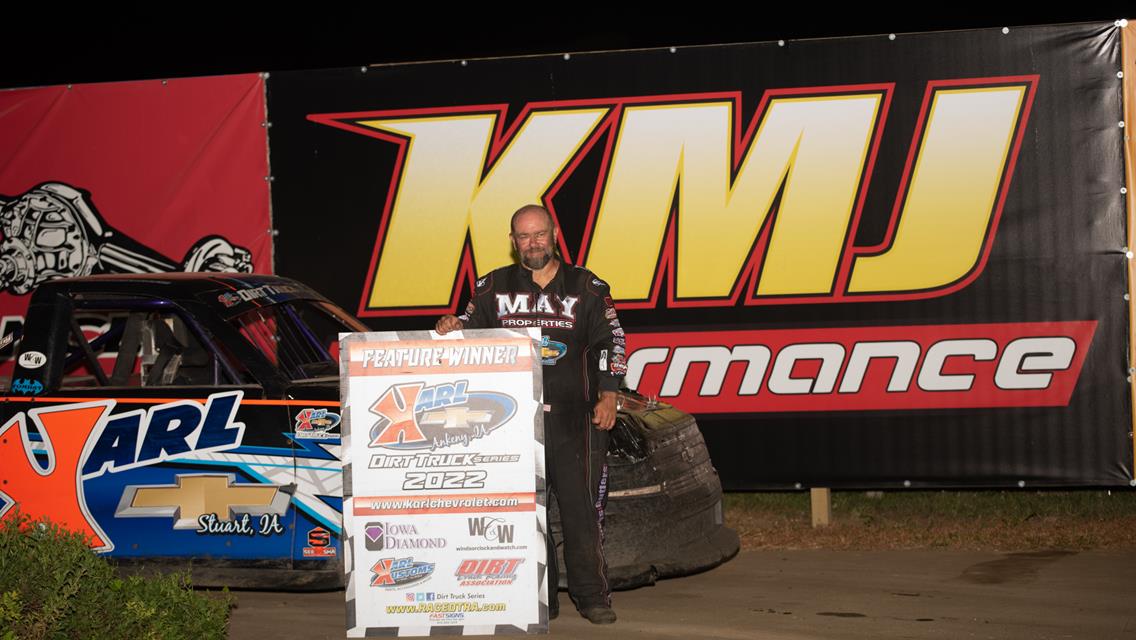