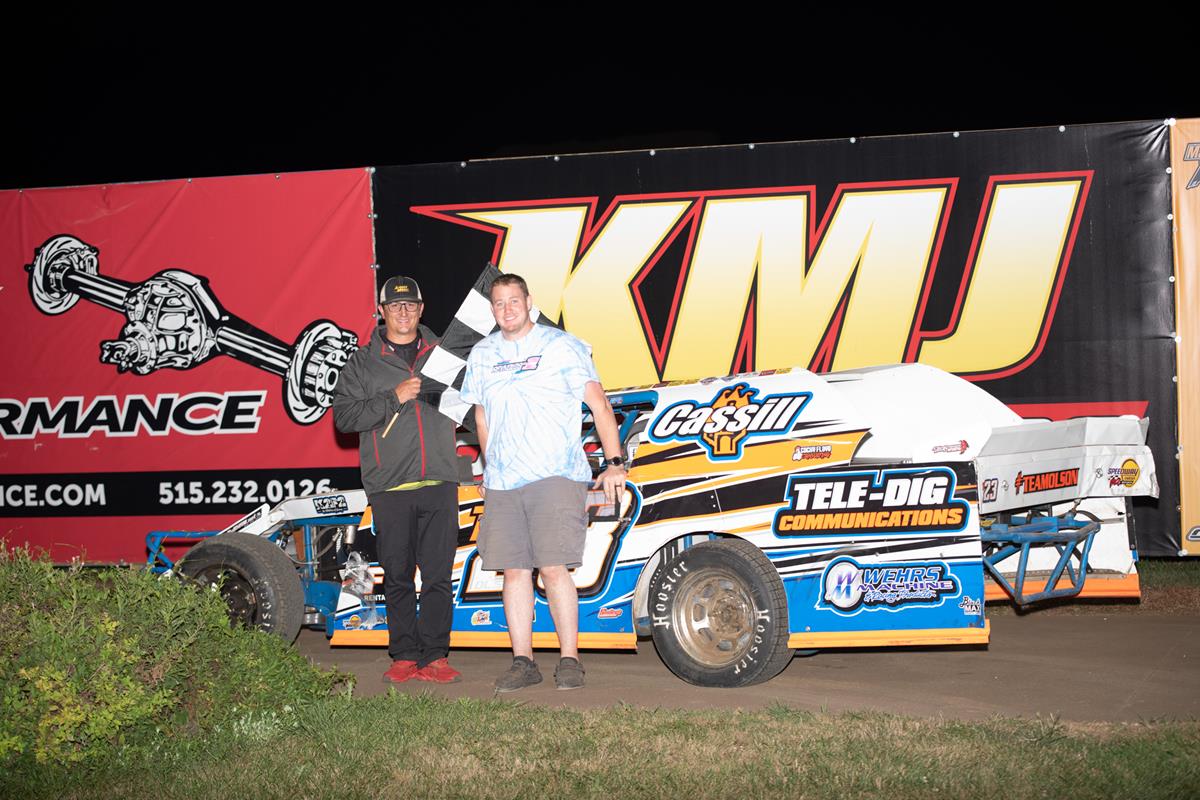 Olson Snags SportMod $1K on BHE Night at the Races

Jason Masengarb, Colona, Illinois, caught and passed early leader Randy Bryan on his way to the checkers in the 15 lap feature for the STARS Mod Lites. He snatched the lead on lap seven and from then on never looked back as he pulled away, and won easily. Bryan finished a distant second, Jacob Copley, Milan, Illinois took third place, it was Josh May in fourth, and Joel Huggins finished fifth. The race went flag to flag.

The headline event for the evening was the 20 lap feature for the IMCA SportMods, as they ran for $1,000 to the winner thanks to Bob Harris Enterprises.

Tony Olson dominated the entire race as he jumped to the lead immediately from his outside front row starting spot, was never seriously challenged, and took the checkers comfortably ahead of the field. Kyle Olson chased his cousin most of the race, but ended up a distant runner up. Brayton Carter started tenth, and finished in third place, and eleventh place starter Jenae Gustin was fourth. Kalin Lopez rounded out the top five. This was Olson's third win of the regular season.

The IMCA Sport Compacts joined in the fun again at the High Banks. They ran a 15 lap feature. Kolby Sabin started fifth, had the lead at lap two....only to slip off the top of turns three and four...bringing out a yellow. Sabin then had to tag the tail for the restart, which now had Tyler Fiebelkorn in command.

Sabin wasn't done yet however. By lap seven, he was back in the lead! He ran the top of the track...now being a bit more cautious, pulled away from the pack, and took the flying checkers and the win. Marshalltown's own John Gill took second place, Fiebelkorn was third, another hometown driver, Travis Hatch was fourth, and it was David Kimmel, New Virginia, Iowa, completing the top five. This was Sabin's fifth trip to Victory Lane this year.

The IMCA Stock Cars came to the track next for their 20 lap main event.

Kaden Reynolds started on the pole and immediately took the lead. By lap three, he was being harassed by sixth place starter Dallon Murty, piloting his father Damon's car.

Then the slides began....Reynolds holding back Murty for a couple of laps until it finally stuck. Murty's nice lead would vanish on lap twelve when a caution flew for a spinning car, and Reynolds anxious for the restart.

Murty however wasn't about to give up his lead, as he ran the rim of the track in three and four, and diamond down off of the top of turn one and into two keeping Reynolds at bay.

As the laps counted down, Reynolds and Austin Kaplan were dueling it out for the number two position, as Murty continued on his merry way at the front. Kaplan was able to make the pass into second in the closing moments, taking second behind Murty, and Reynolds taking third. Taylor Kuehl ran at the front of the pack all night long, and took fourth, and Steve Meyer finished in fifth. This was Dallon Murty's first Stock Car win at Marshalltown this year.

Carlisle, Iowa's Garrett Wilson was looking strong in the 20 lap A main of the IMCA Modifieds. He jumped from third starting spot to the lead on lap one and then kept it there with some heavy hitters chasing him. He was able to maneuver through lap traffic, still leading at the halfway mark, as now Cody Laney and Tim Ward were hot on his tail.

A spinning car brought out the yellow on lap fifteen, and this proved to be Wilson's undoing. Cody Laney took to the top of the High Banks, and had the lead on sixteen. He then kept it the rest of the way to the checkers and the win. Wilson ran an impressive race, but had to settle for second. Tim Ward finished third, last week's winner Jake McBirnie started thirteenth and took fourth, and Dallon Murty came from tenth to finish fifth.

The 20 lap IMCA Hobby Stocks put a night cap on the racing program. Austin Mehmen led this one from start to finish to snag his first win of the year. He was content to let a gaggle of cars fight it out behind him for position throughout most of the race. As the checkers flew it was Eric Knutson taking second place from starting in twelfth position. Calvin Dhondt came on strong in the closing laps and finished in third. Early contender Sam West finished fourth, and Sully, Iowa's Cory Van Der Wilt was fifth.

Next Friday night, August 19, is Karl Kustoms Night at the Races. The IMCA Modifieds, Stock Cars, Northern SportMods, Hobby Stocks, and Mod Lites will again be action. The green flag drops at 7:30. 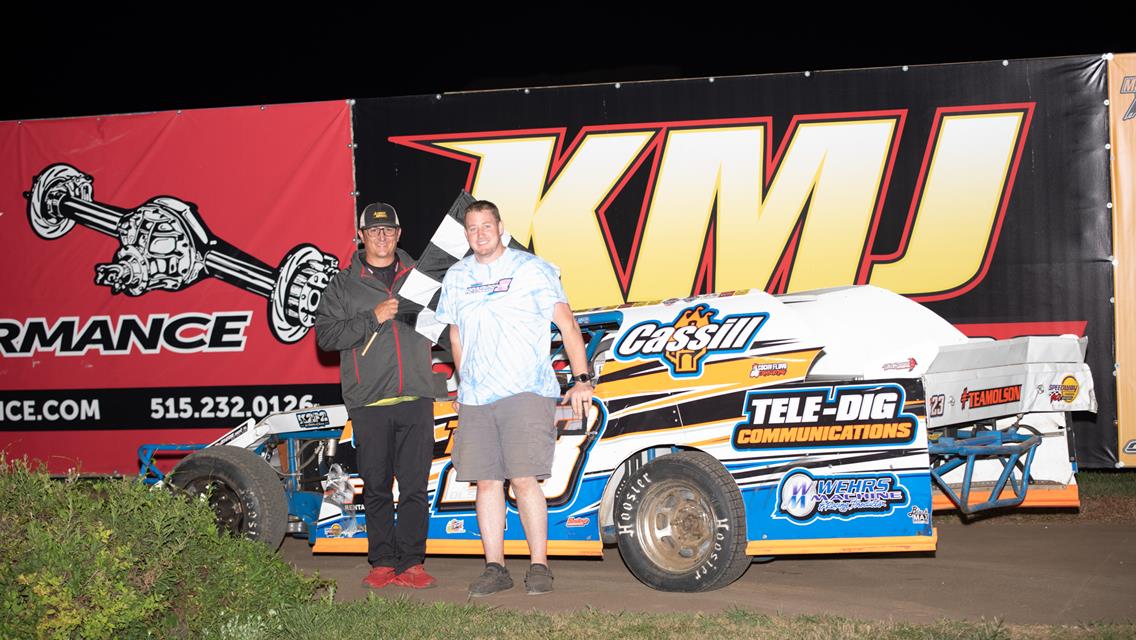 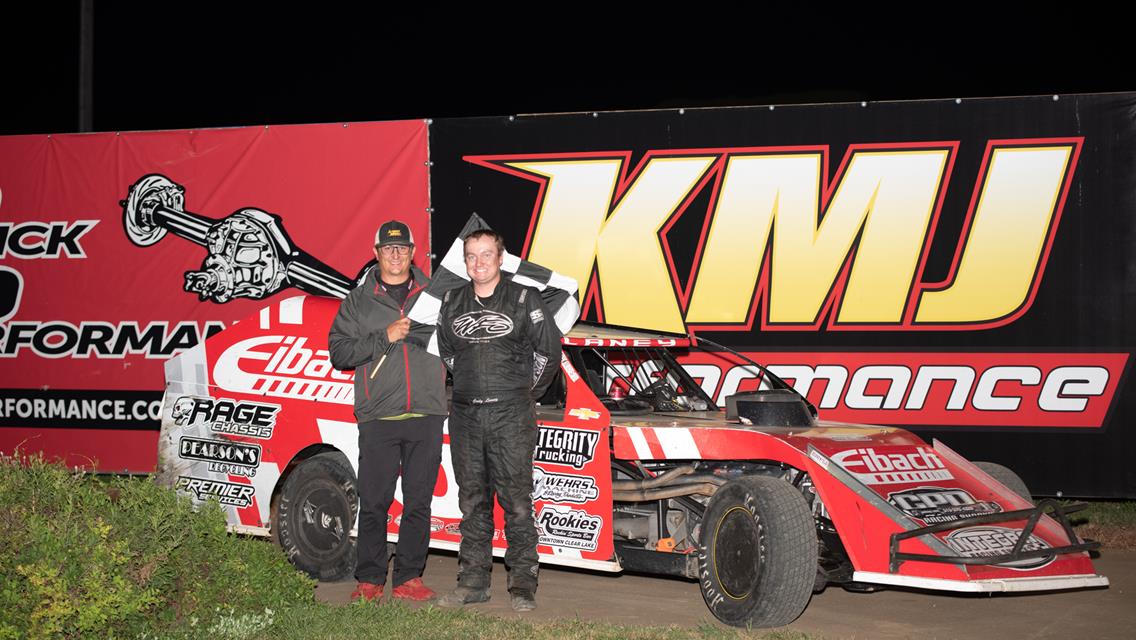 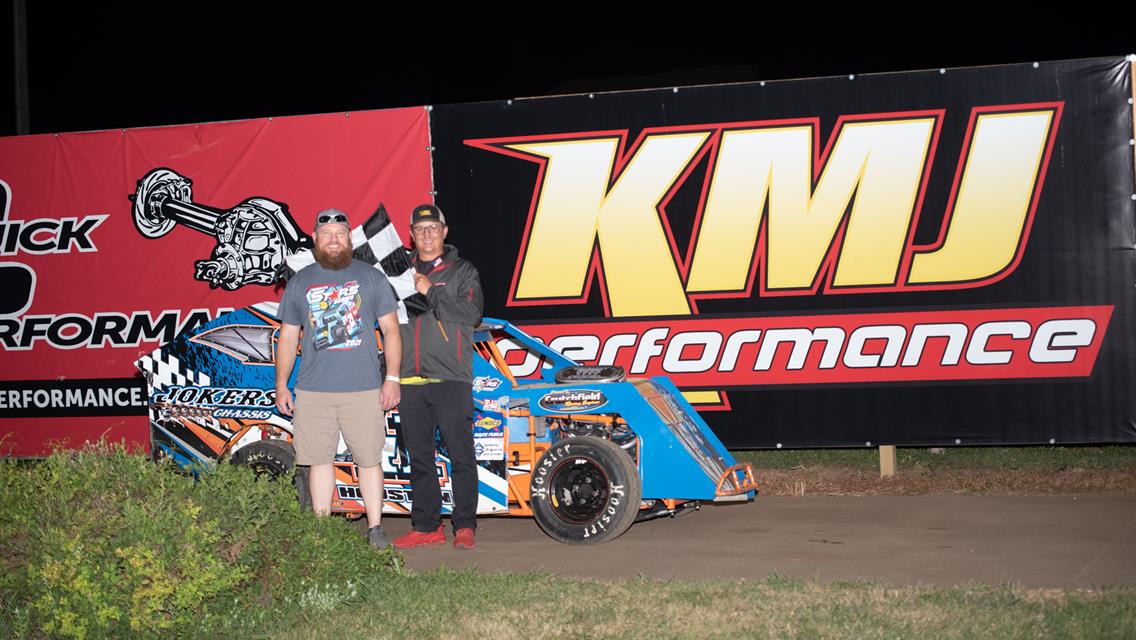 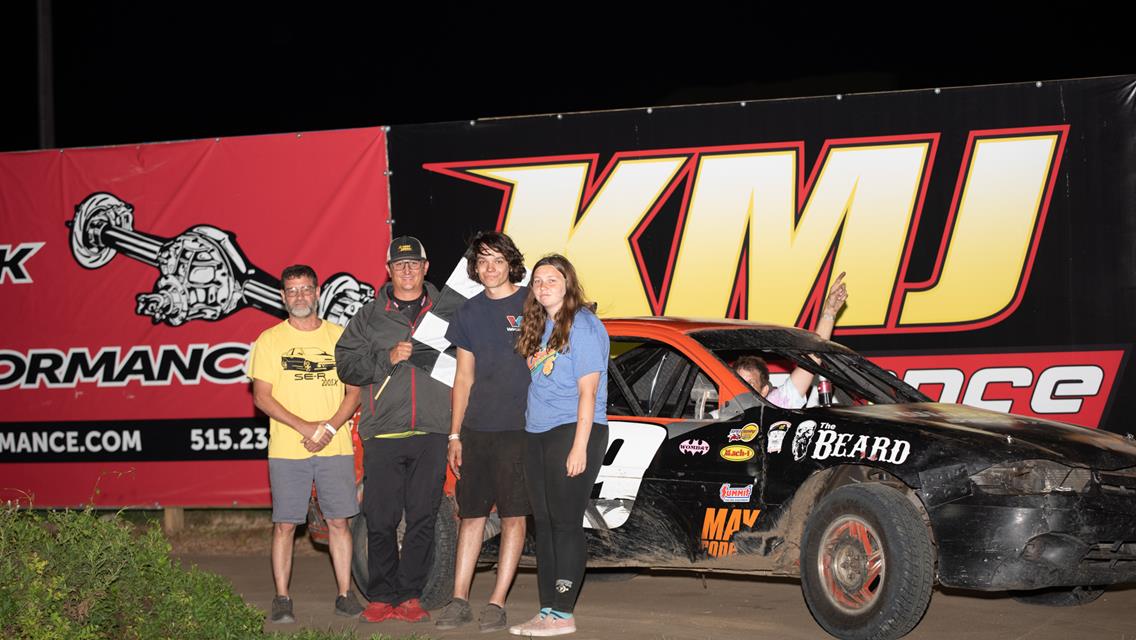 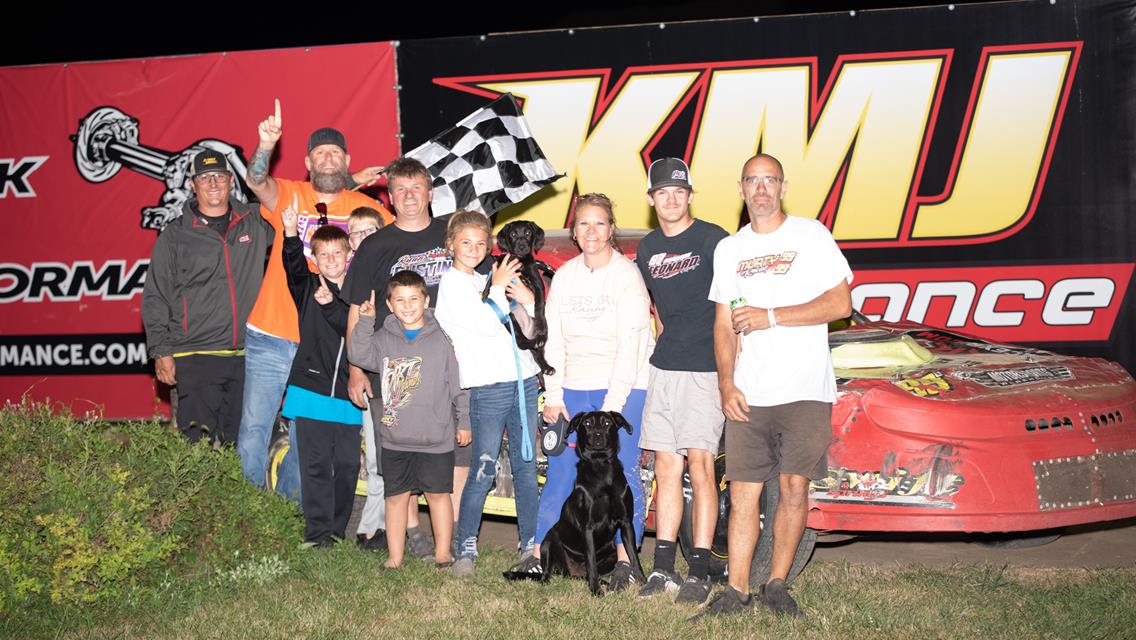 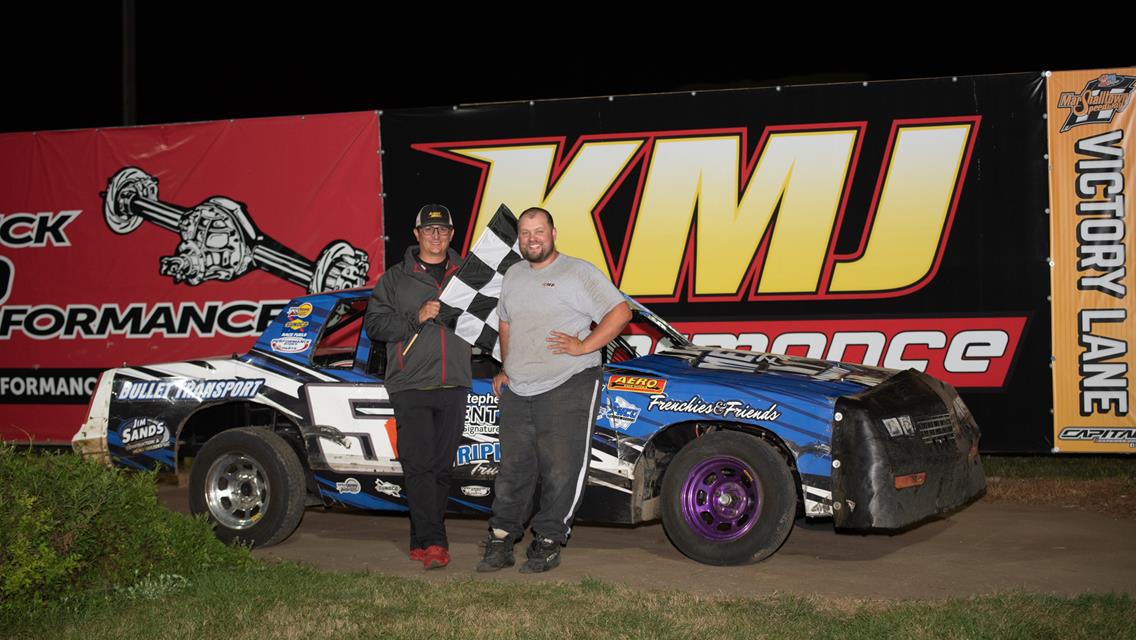