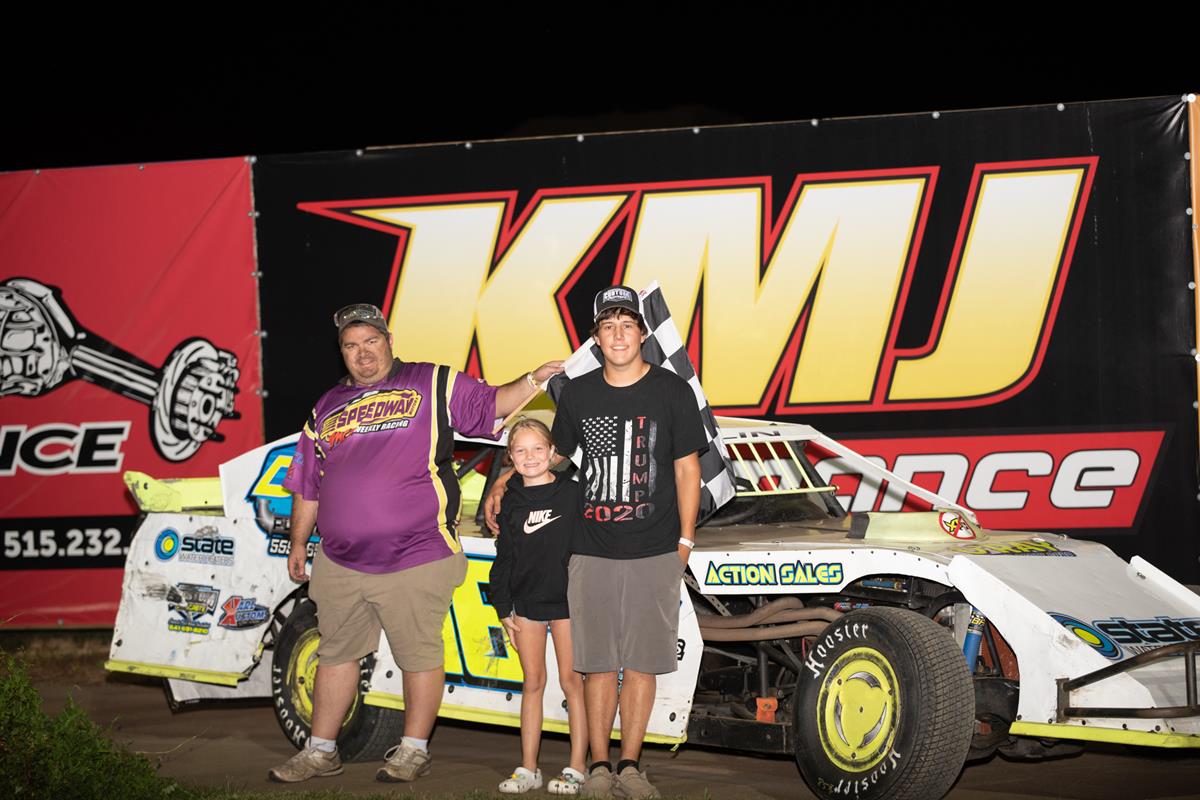 There was a threat of rain and ominous clouds all around, but the Marshalltown Speedway avoided the shenanigans and racing went on as usual on Friday night.

Karl Kustoms Night at the Races saw Tim Ward win for the first time this year in the Friesen Performance IMCA Modifieds. Steve Meyer made it win number two on the year when he saw the checkers first in the IMCA Sunoco Stock Cars. Kaylin Lopez finally put it in Victory Lane when he won the IMCA Friesen Performance Northern SportMod feature. Bradly Graham chalked up his second win of the season in the IMCA Sunoco Hobby Stocks, and Randy Bryan won his fifth feature in the IMCA STARS Mod Lites. The Outlaw Cruisers joined in the fun Friday and it was the team of Corey VanDerWilt, and Brett Maasdam seeing checkers.

The feature racing kicked off with 15 laps of Mod Lite racing and when all was said and done, it was Randy Bryan getting his fifth win. Bryan started fifth, and snatched the lead away from Cory Sonner on lap two....never to look back. Sonner finished as the runner up. It was a shoot out between the two #50 cars for third and fourth with Joel Huggins finishing just ahead of Charlie Brown. Following a distant fifth was Alex Eischeid who recovered well after spinning on lap one.

Bradly Graham was dominate in getting his second feature win of the year as he led all 20 laps on the way to the flying checkers. It was a dogfight behind him for position however, with cars going 4-wide at times. Eric Knutson, who started ninth, won that battle as he took the runner up spot. A close third place went to Solomon Bennett, eleventh place starter Austin Mehmen was fourth, and Mark Hidlebaugh rounded out the top five.

Kaylin Lopez took the lead as the race went green in the 20 lapper for the IMCA Northern SportMods. By lap seven, he was holding off Jenae Gustin until she then took command at the halfway mark of the race.

Gustin was enjoying her run at the front of the field when a yellow flew at lap sixteen. Just before the restart, Gustin was suddenly off power on the backstretch, and had to be pushed into the pits...ending her night on a disappointing note. This then handed the lead back to Lopez for the final four lap dash to the finish. He was able to hold that top spot the rest of the way, and score his long awaited first win at the speedway.

The IMCA Stock Cars put on another exciting race in their 20 lap A feature. Kaden Reynolds was looking strong in the early portion of the race as he led the field. He soon had Damon Murty and Steve Meyer following him "up top" as they circled the High Banks.

Meyer got around Murty on lap eleven, and then took command on lap thirteen. He weathered three yellow flag restarts after that, and then took his ride to victory lane...the second time this season.

Regan Tafoya, visiting from Farmington, New Mexico, led the opening laps of the 20 lap feature for the IMCA Modifieds. On lap three, it was Ronn Lauritzen in charge. He had big time company behind him however as Joel Rust and Tim Ward were hot on his tail.

Lauritzen hung on until lap fourteen, when it was Ward taking over as captain of ship. From then on, it was all Ward as he hung on to take the checkers. Lauritzen held on to second place, and Rust was third. Another visiting driver, Grey Ferrando from Stayton, Oregon took fourth, and ninth place starter, Dallon Murty was fifth. 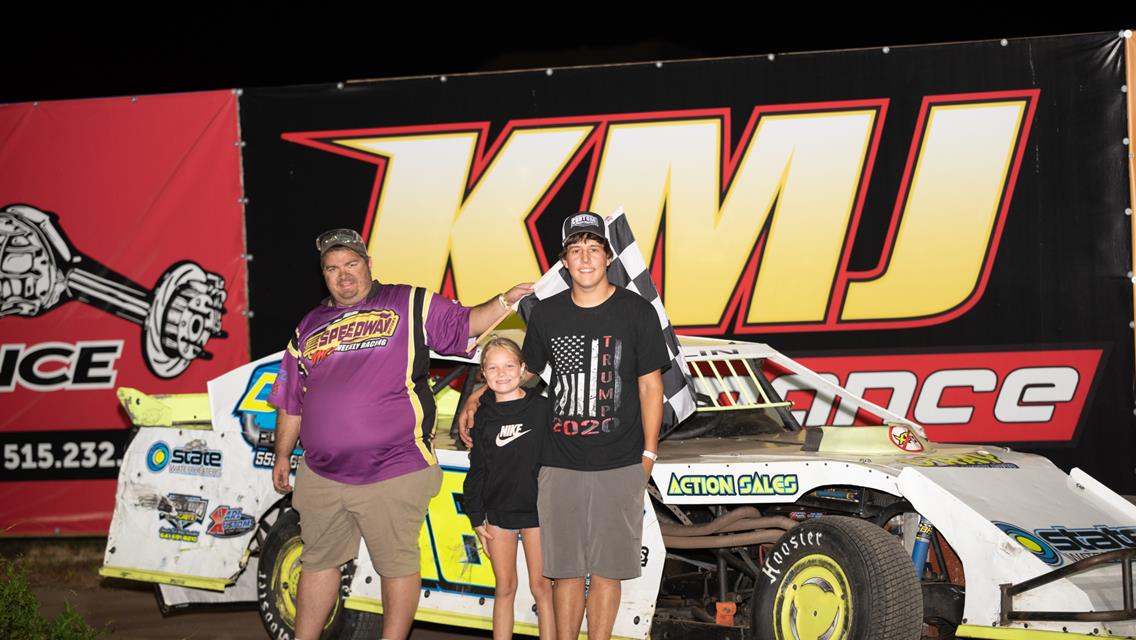 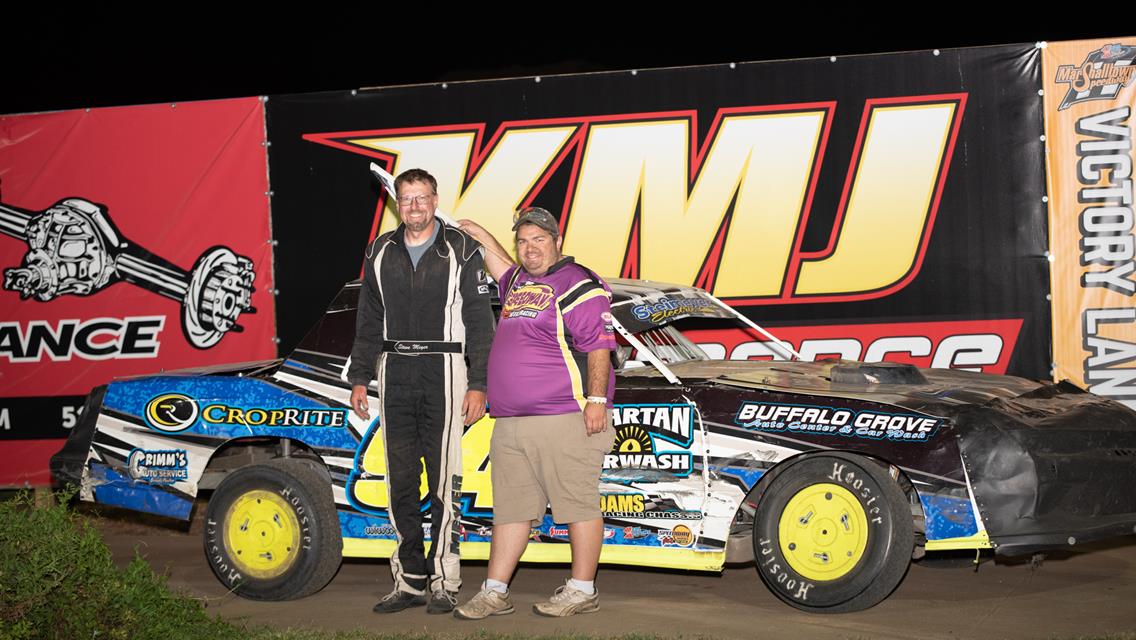 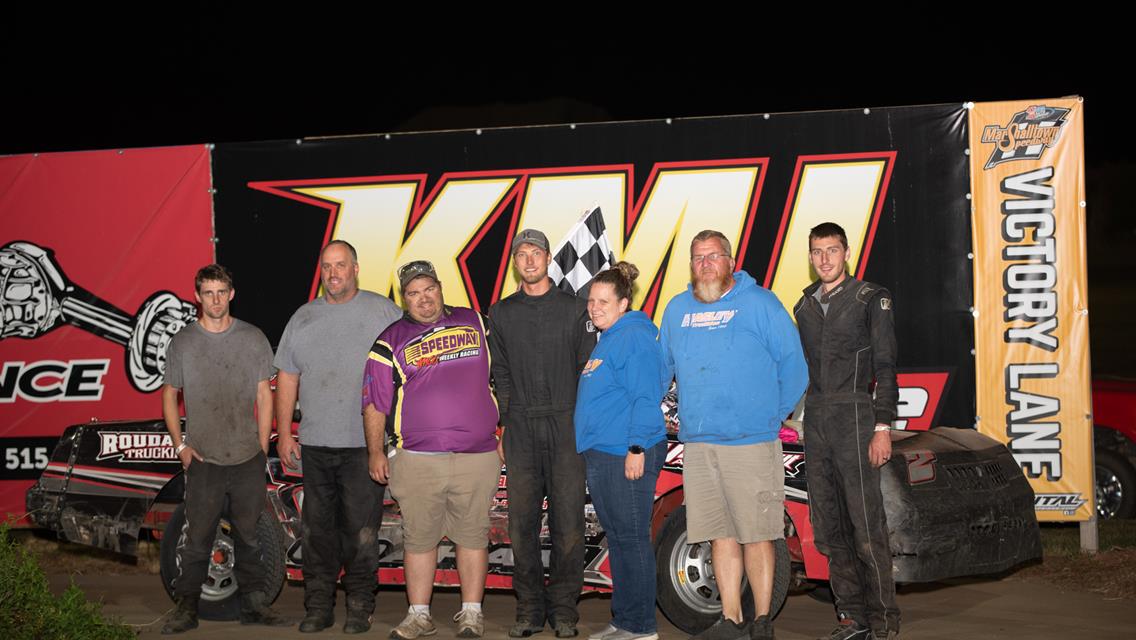