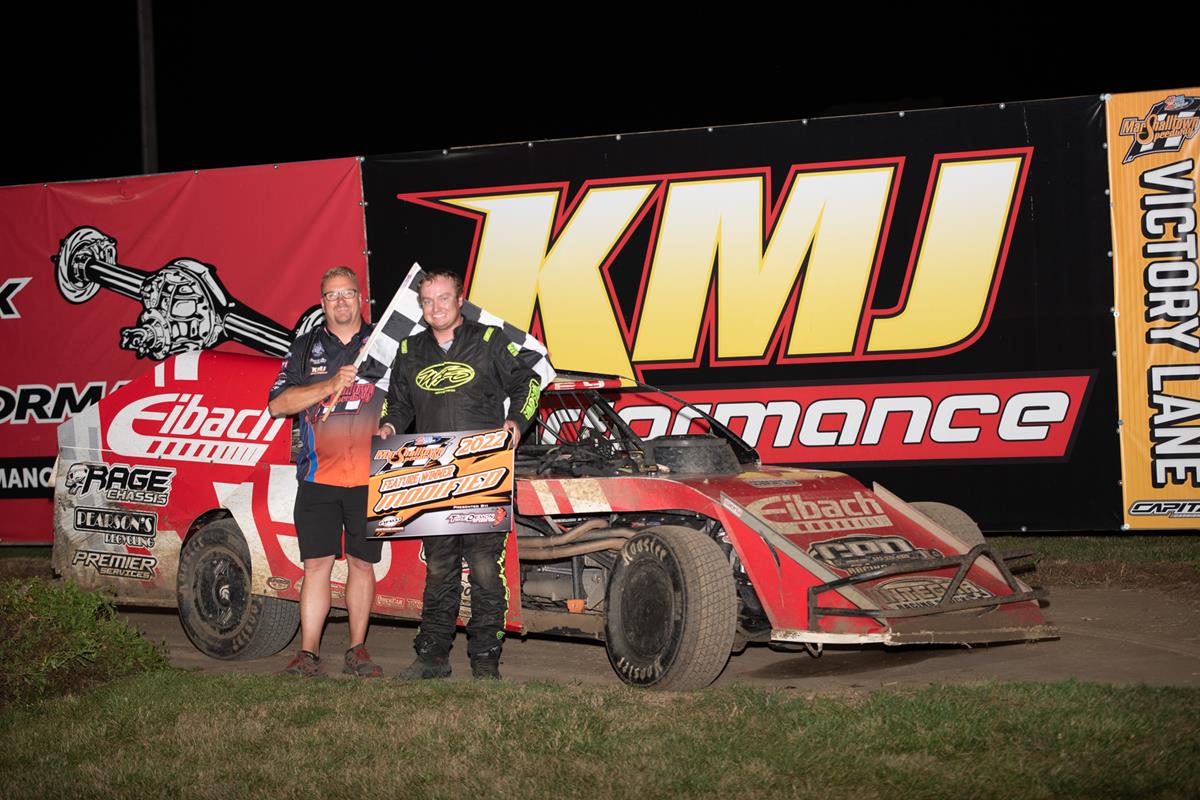 Marshalltown, Ia August 26, 2022
It was North 3rd Avenue Dairy Queen Larry Wollam Memorial and Season Championship night at the Marshalltown Speedway on Friday. Seven classes were in competition that provided a full night of racing action at the High Banks.

The first eight in points in each class were locked in, and they would start inverted for their A Feature. The rest of the field was filled in by their finishing order from heats.

There were out of car introductions of the drivers on the frontstretch to allow the fans to show their appreciation to the drivers who entertained them all year long.

The first feature to hit the track was the IMCA STARS Mod Lites. Their feature went 15 laps and was led from start to finish by Cory Sonner. He started from the pole position and rocketed off immediately as he pulled away from the field. He finished well ahead of second place Ben George. Trailing a distant third was tenth place starter Jason Masengarb. Fourth place was Randy Bryan, and fifth went to Jon Padilla. The race went flag to flag. Randy Bryan is the 2022 Track Champion.

The IMCA MACH-1 Sport Compacts rolled to the track next for their 20 lap feature event. Early leader was Blake Driscol who started on the point. He was quickly run down by seventh place starter Kolby Sabin who snatched the top spot away by lap three.

After getting the lead, Sabin pulled away and enjoyed the easy run at the front of the field the rest of the distance to the checkers and the win. Cristian Grady started eleventh, and finished as the runner up. He had just passed early leader Driscol, who was suddenly off power just after the white flag. This put John Gill in third, fourth was Matt Miller, and Tyler Fiebelkorn finished fifth. This was Sabin's sixth feature win of the season, and he is the 2022 Track Champion in the Sport Compact division.

Sam West was a happy first ever winner who stepped into Victory Lane at the end of the 20 lap feature for the IMCA Sunoco Hobby Stocks. West started third, and found himself in the lead by lap four after a skirmish occurred taking out early leader Briar Kriegel, and two other top runners, Corey VanDerWilt, and Eric Knutson. From there on, West held off all challengers that were in hot pursuit, and took the win...his career first. John Watson made a late race charge but had to be content with second. Third went to Bradly Graham, Solomon Bennett was fourth, and veteran racer Bob Daniels started sixteenth and rounded out the top five. Bradly Graham is the 2022 Track Champion in the Hobby Stock class.

Travis Peterson passed Sam Wieben at the halfway mark of the IMCA Friesen Performance Northern SportMod 20 lap contest, and though Jenae Gustin threw everything but the kitchen sink at him in the closing laps, he held on and took the win. Twelfth place starter Gustin had to be satisfied with the runner up spot, Tony Olson started ninth and finished third, fourth was early leader Sam Wieben, and Tyler Soppe drove his hot rod from eighteenth to finish fifth. This was Peterson's third feature win of the season. Kyle Olson is the 2022 Track Champion.

The IMCA Sunoco Stock Cars came next for their 20 lap feature event. Dave Atcher started on the outside front row and jumped to the immediate lead. His run at the front ended when Kaden Reynolds came calling on lap six, taking over the number one spot.

Reynolds would have to weather three more cautions and subsequent restarts, but was able to do so as he took the flying checkers and the win. Austin Kaplan chased Reynolds for most of the race, but could do no better than post a runner up finish. Michael Jaennette started seventh and finished third, early leader Dave Atcher was fourth, and Jeff Wollam finished fifth. This was the second trip to Victory Lane for Reynolds this year.

It was a tight battle for the track title in the Stock Car division with Jeff Wollam two points up on Michael Jaennette going into the race. Jaennette finished two spots ahead of Wollam which gave them a tie in points. With Jaennette having three feature wins for the year, that was the tie breaker, and he is the Track Champion for 2022.

Johnathon Logue started on the pole of the 20 lap IMCA Friesen Performance Modified feature, and jumped to the lead as the race went green. Logue sailed along at the front of the pack until lap 10 when Cody Laney, who started ninth, took over. Laney pulled off from the field then until the closing laps when twelfth place starter Joel Rust began to close the gap. Rust made it interesting in the closing moments, but fell short, and followed winner Laney across the line in second place. Jimmy Gustin out fought Dallon Murty at the checkers as they finished third and fourth respectively, and Johnathon Logue rounded out the top five. This was Laney's second win at Marshalltown this year. Dallon Murty took the crown for the 2022 track title.

The night ended with the Outlaw Mini Mods who were paying a third guest appearance at the track this season. They ran a 15 lap feature to put a night cap on the racing.

Ben Kraus started third, and had the lead on lap two, never to look back. He sailed along well ahead of the field for the rest of the race, never challenged. Nathan Kilwine was a distant runner up, Lucas Daniels took third place, lap one leader Micheal Bryant was fourth, and sixteenth place starter Kaden Rice completed the top five positions.

This drew to a close the regular season at the Marshalltown Speedway. However, next Friday night September 2, will be the Karl Kustom Showdown at Motown. IMCA Modifieds, Stock Cars, Northern SportMods, Hobby Stocks, Sport Compacts and Mod Lites are on the program, along with the Karl Chevrolet Dirt Trucks. Hot laps are 6:55 and racing at 7:30. 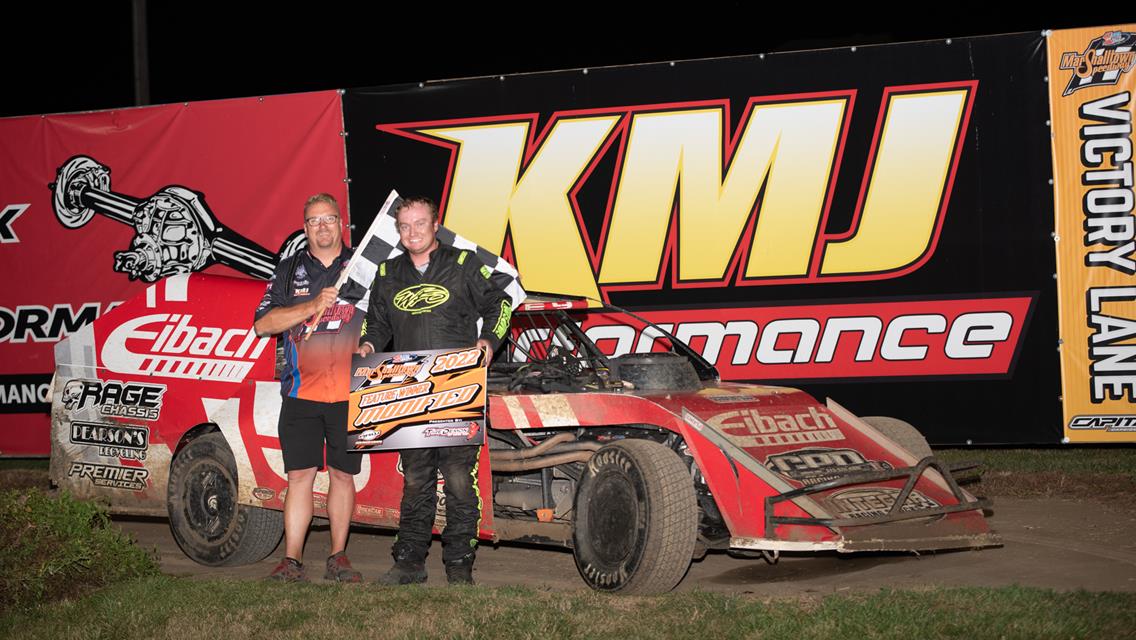 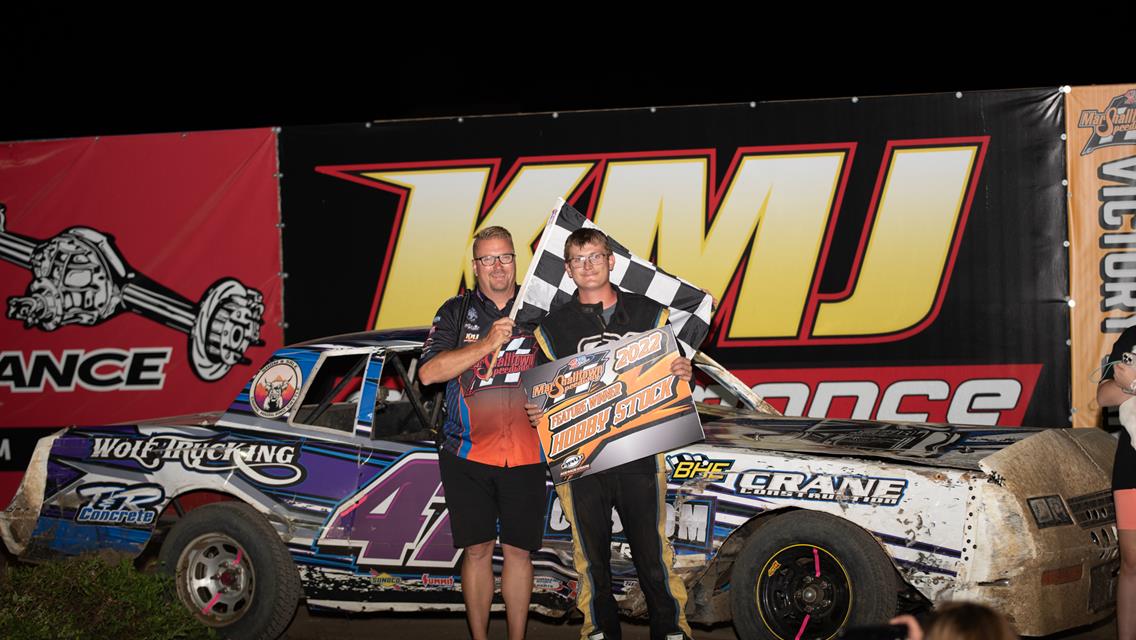 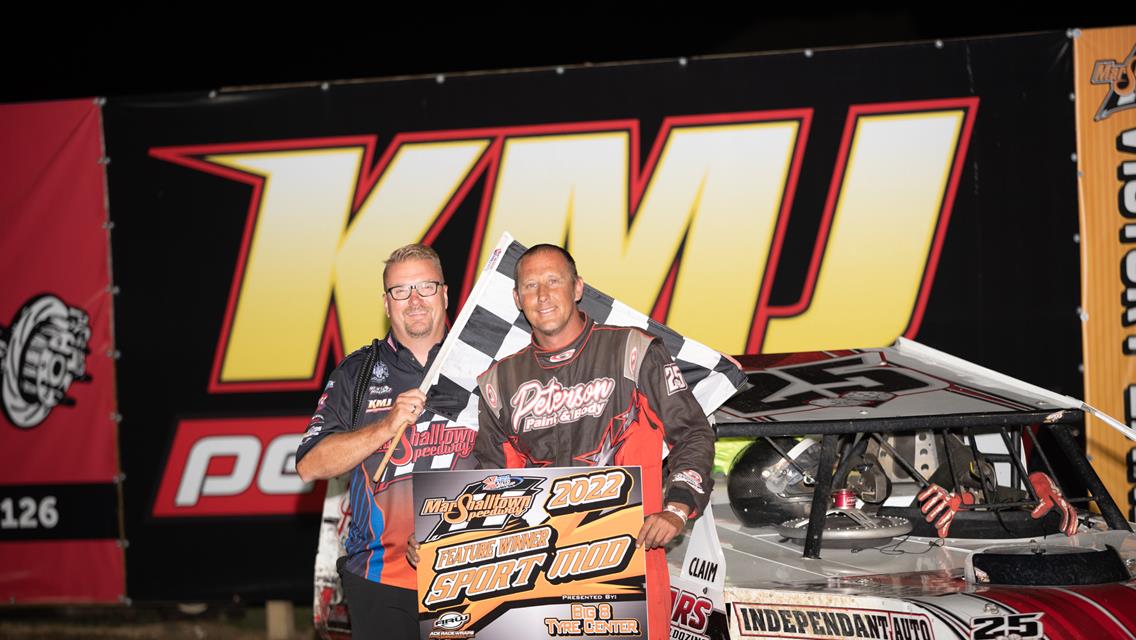 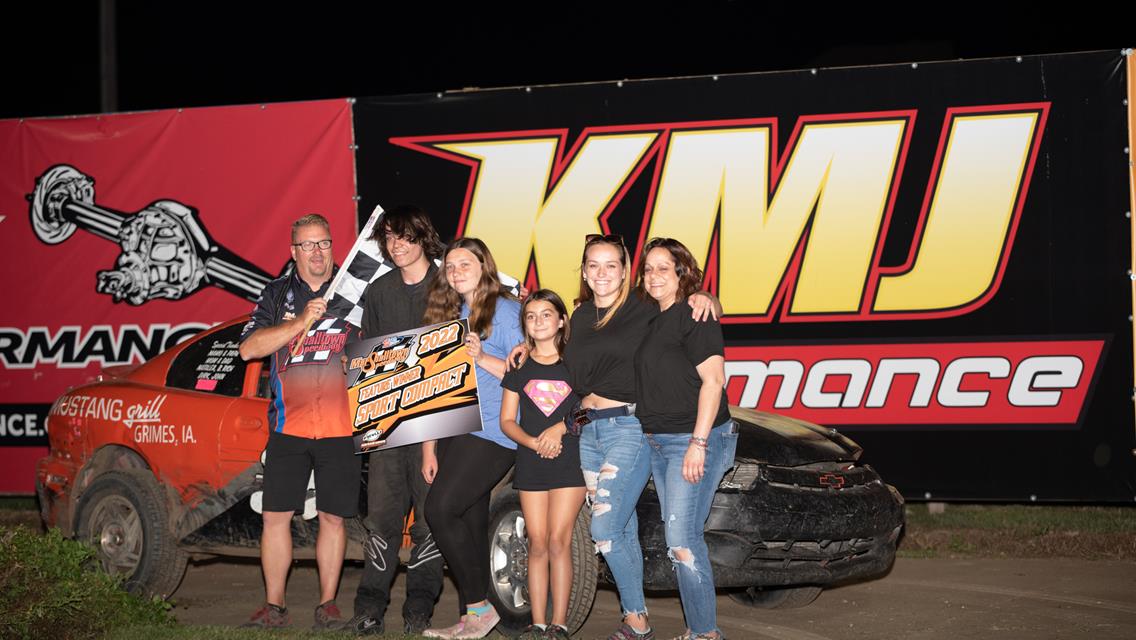 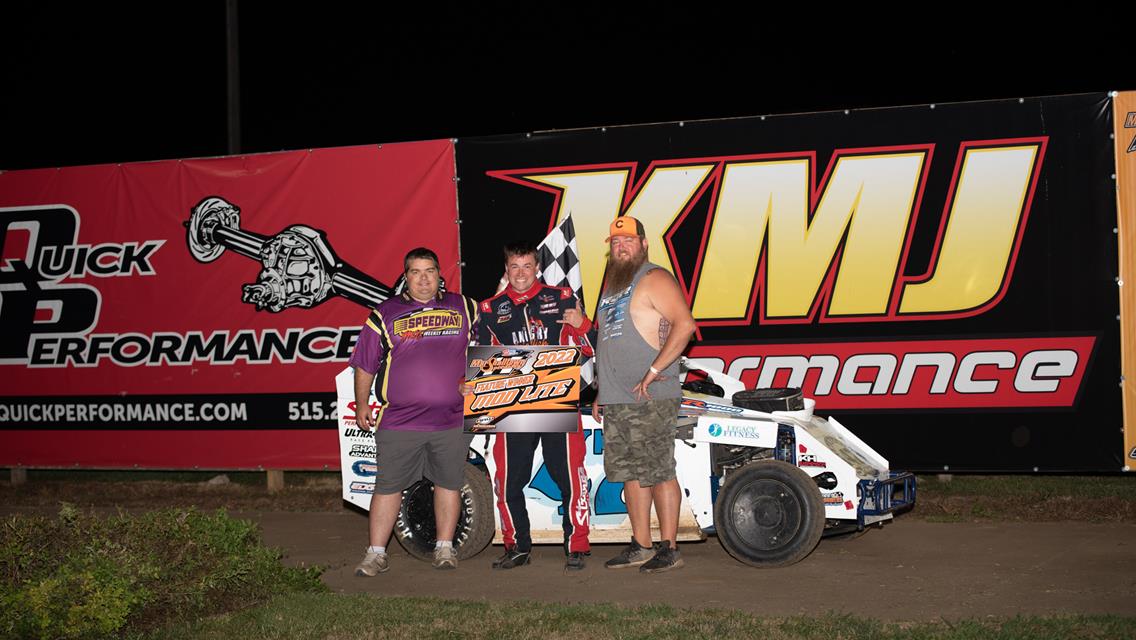 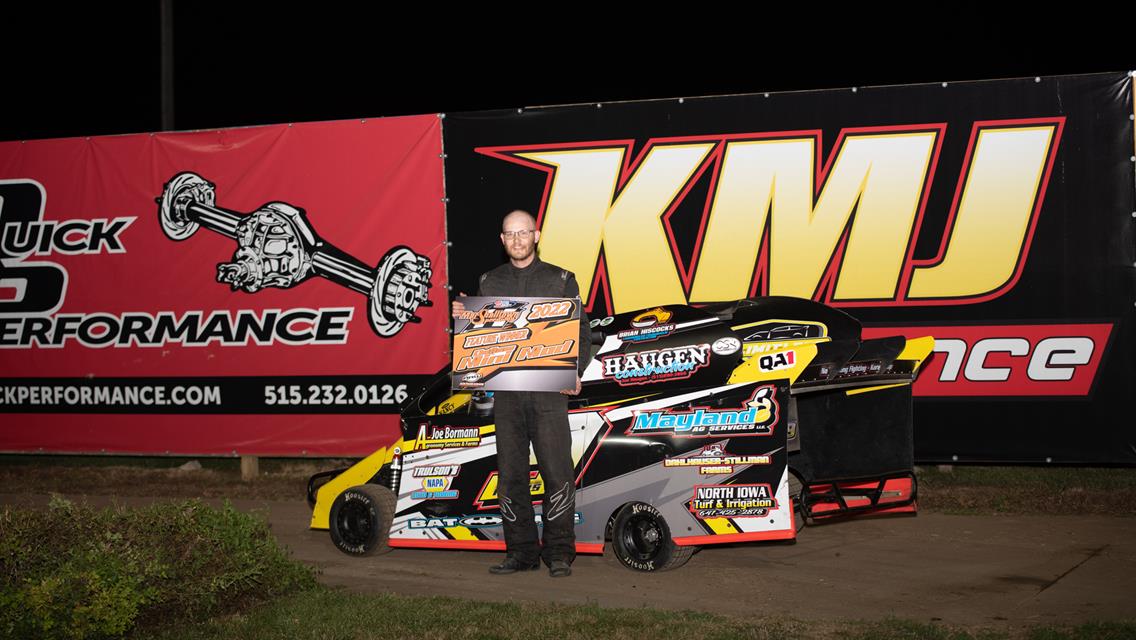 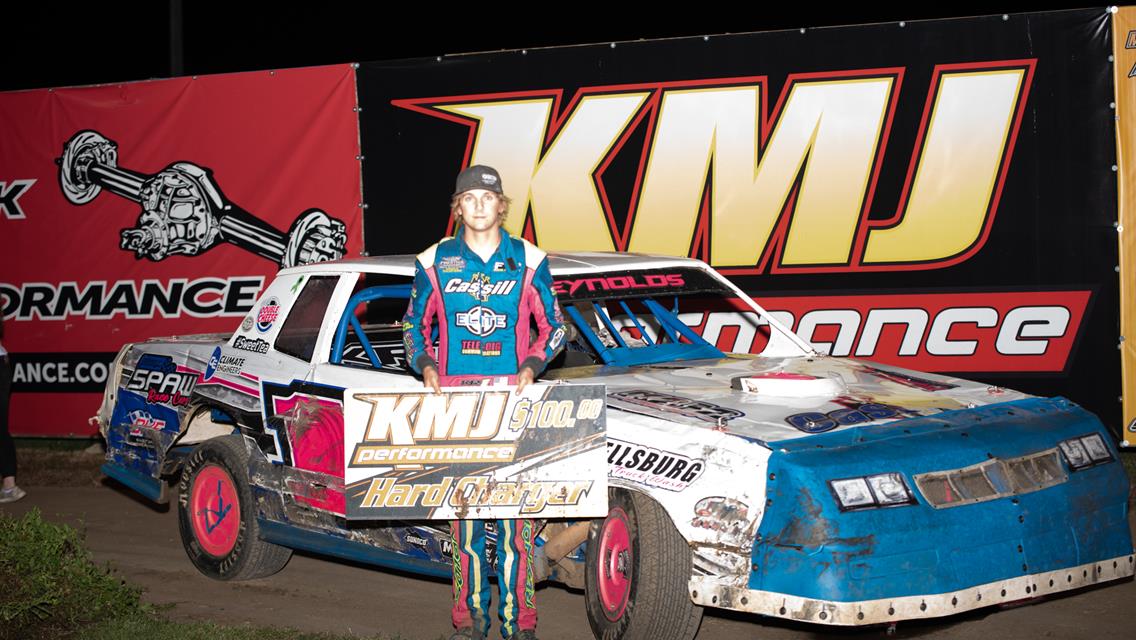