June is the "Month of Money" for IMCA Modifieds at...

1/26/2023 -
January 26, 2023 Marshalltown, Ia Friesen Performance IMCA Modifieds will see big payout during the month of June this season. One racer could go home

June is the "Month of Money" for IMCA Modifieds at MoTown

1/26/2023
January 26, 2023 Marshalltown, Ia Friesen Performance IMCA Modifieds will see big payout during the month of June this season. One racer could go home after five Friday nights of IMCA Speedway Motors weekly racing with a potential of $4,700.00 minimum. “This is exciting...more 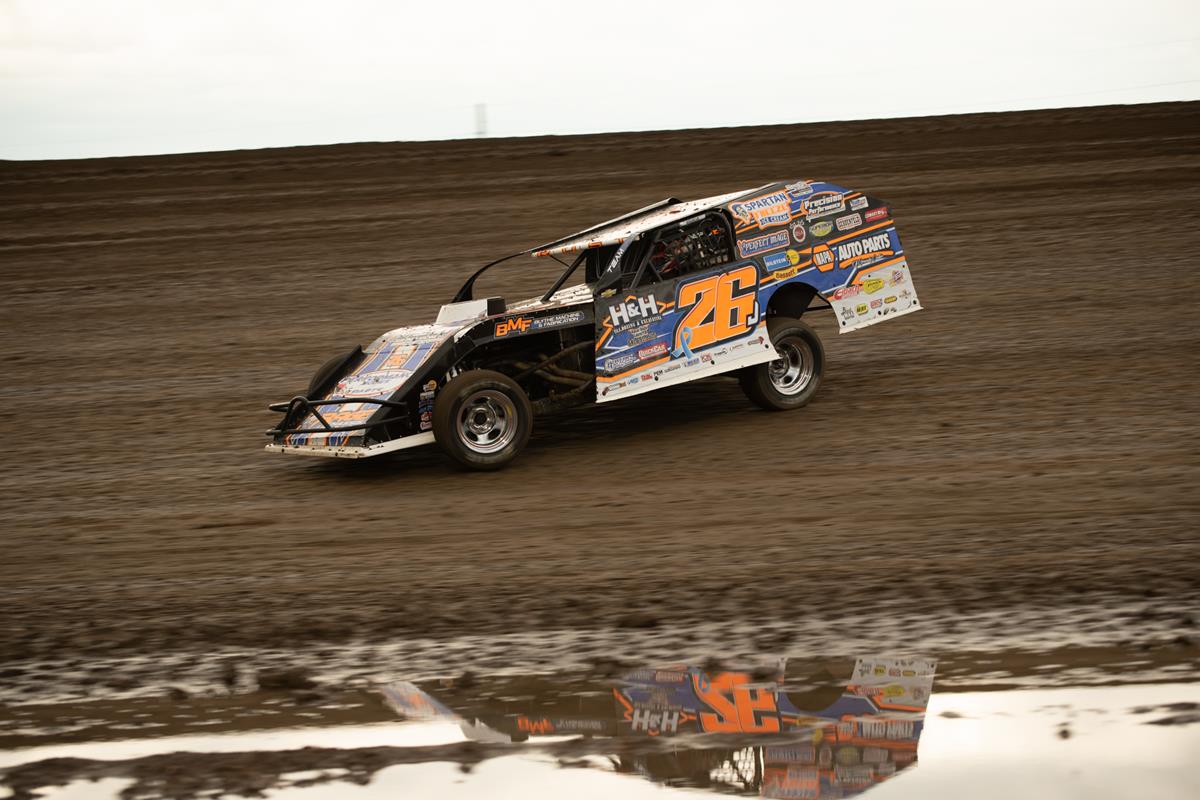 Marshalltown, Iowa September 17, 2022 It was UAW Local 893 Cliff Chambers Memorial Saturday Spectacular for Night #2 of the 16th Annual World Nationals at the Marshalltown Speedway. An early start time of 6 pm allowed the night's action to be nearly completed before Mother Nature put an end to it.

The Friesen Performance IMCA Modifieds and Northern SportMods were once again on the docket as were the IMCA Sunoco Stock Cars and Hobby Stocks and the MACH-1 IMCA Sport Compacts.

The IMCA Northern SportMods came to the track first for their 20 lap main event. This one would be led from start to finish by "Speedy Bray" Brayton Carter who hails from Oskaloosa, Iowa. Tony Olson finished as the runner up after chasing Carter for most of the race. Jenae Gustin started ninth, and powered around tenth place starter Logan Anderson on the restart of a green-white-checkered finish as they finished third and fourth respectively. Jarett Franzen, Maquoketa, Iowa completed the top five. Carter went home $1,000 richer for his victory.

The program was moving swiftly along with the threat or rain in the area, and the IMCA Modifieds were brought to the track next for their 30 lap, $2,000 to win feature.

Early leader was pole sitter Scott Simatovich who held that top spot until lap five. That's when Madrid, Iowa's Kyle Brown took over as captain of the ship. He had company on his tail almost immediately as Richie Gustin jumped into the second spot. The two continued their run around the top of the High Banks until a caution paused the action on lap fifteen. On the restart, Ryan Maitland threw his hat in the ring, snatching second place and began his quest to overtake Brown.

Another yellow flew on lap twenty-one and by this time it was Grundy Center's Joel Rust who had come calling, and chomping at the bit for the restart as Brown continued his lead. Rust stuck close to Brown and on lap twenty-four, threw a slider that got the job done, as he swept into the lead. In the final circuits, Rust pulled away at the finish to take the comfortable win. Kyle Brown finished as the runner up. A distant third place was fifteenth place starter, Cody Laney. Richie Gustin ran at the front of the pack all night, and took fourth place. New driver for the night, Kelly Shryock came from tenth to finish in fifth.

The IMCA Stock Cars were then quickly brought to the track for their 25-lap $1,000 to win event.

Polesitter Tom Cannon from West Branch, Iowa led the troops through lap ten as a pack of five cars were going at it in hot combat behind him. Those drivers.... Michael Jaennette, Damon Murty, and son Dallon Murty, last night's winner Jeff Mueller, and Dustin Vis were locked into a real battle.

Damon Murty overtook Cannon on lap eleven and soon Mueller moved his way into second place. Mueller, who is known to love the bottom of the track, was digging hard down low once again, while Murty was hanging out on the top of the track. Once again Mueller's choice of the bottom paid off when he took over the top spot with a lap to go, and then held on to take the checkers for the second night in a row. Damon Murty held on to second place, son Dallon Murty, who started eleventh, finished in third. Austin Kaplan was fourth, and early leader Tom Cannon was fifth.

A few rain drops were starting to fall as the IMCA Hobby Stocks made their way onto the track for their 20 lap "A" main.

William Klosterman started sixth on the field and snatched the lead away from newcomer for the night, Curt Reed at lap four. Klosterman continued to hold his lead though John Watson had been challenging him from lap eight right up to lap fourteen, when a caution came out. That's when the raindrops grew more frequent, the track grew shiny, and the call came that the race was called yellow/checkered. Klosterman was awarded the win, with Watson taking second. Eric Knutson, Sam West, and Curt Reed were credited with third through fifth respectively.

Unfortunately, the IMCA MACH-1 Sport Compacts didn't get a chance to run their 15 lap feature event due to the rain and the races being called.

This was the final event for the Marshalltown Speedway for 2022. We looks forward to the 2023 season with schedule coming out in November.